Our Fall SUP Racing Wrap Up

The last two weeks have been a fun blur of SUP racing. The new local stand up paddle shop at Lake Norman, My Aloha Paddle Sports & Fitness, held their first SUP race on Oct 8th. It took place at Vinnie's restaurant, which is located lakefront on Lake Norman and made for a great spectator friendly area to watch the racing. The course was set up in laps with buoy turns all in front of the restaurant and the main road leading right by the water. There were over 35 racers in all, which was a great turnout and a nice surprise given that the race was planned only a few short weeks in advance. The best part was the event raised over $1,000 for the local Habitat for Humanity. Lake Norman has a very fast growing SUP community and has the potential to have a really big SUP event that could attract racers from all over the country.

Here are the race results and some pictures. Here are a couple of local articles about the race...here and here.

This past weekend, the family and I participated in the 2nd Annual Golden Isles SUP Classic in St. Simons Island, GA. The event is put on by WhiteCap Windsurfing & Stand Up Paddling...and Paddle and Putt, which is pro golfer Davis Love III's local shop. For those that don't know...Davis Love III, future hall of fame pro golfer and the 2012 Ryder Cup captain, has taken up stand up paddling as his new passion and does it for its fitness and cross training benefits. The following photos tell the story of our weekend...

After a 5 1/2 hour car ride, we went straight to the beach Friday evening and let the kids release some pent up energy... 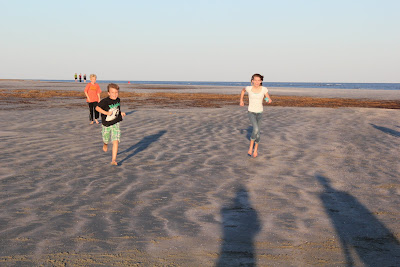 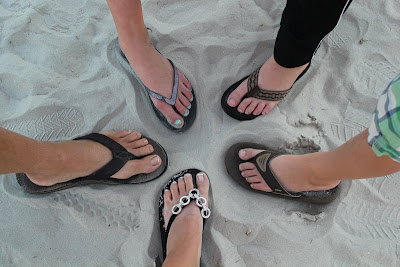 Saturday morning - getting in a pre-race warm-up with my daughter, McIntyre. The weather was absolutely amazing....sunny, low to mid 80s, and a light offshore breeze. 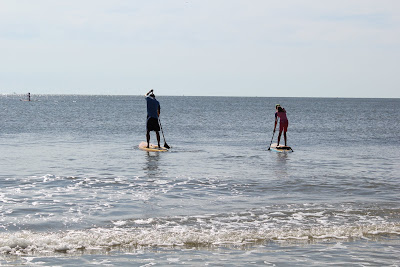 Giving McIntyre some instruction about the race course. She decided that morning to race in the 3 mile Recreational Division with the adults. 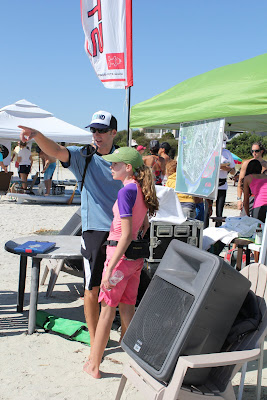 My brutha from another mutha - the other Mac! This is another whole story unto itself. He works with Davis Love III, is co-owner of the Paddle and Putt shop, we have the same first and last name, spelled exactly the same, we grew up within 1 hr from each other in NC, our kids are the same age, and we both stand up paddle. What are the chances of that? 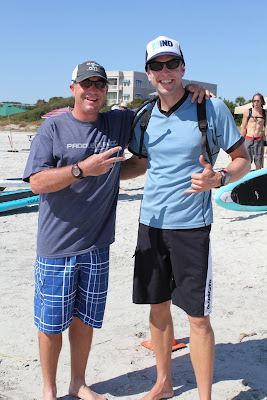 ...and some of my friends also call me "MacDaddy". This slogan is hilarious and has new meaning now that there are two of us! 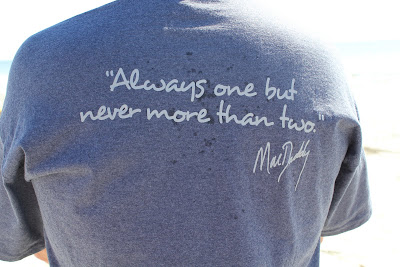 Davis Love III speaks before the race. He said he "conveniently" missed the cut of the local PGA event so he could come check out the event on Saturday. He wanted to race but was nursing an injury. Davis said he loves to SUP surf. To the right of Davis is Chuck Hardin, co-owner of WhiteCap Windsurfing and Stand Up Paddling. Those of you who follow windsurfing may remember Chuck wrote an article for Windsurfing Magazine a couple of years ago where he did the Matt Pritchard wavesailing clinic at Solo Sports/Punta San Carlos, Baja Mexico...and they burned/sacrificed his seat harness. Its burnt and charred remains are still in the lounge, left there and mounted on a plaque as a hilarious reminder. Chuck, WhiteCap co-owner Danny Johnson, the Paddle & Putt folks, and their volunteers did an outstanding job with the race and post race party. 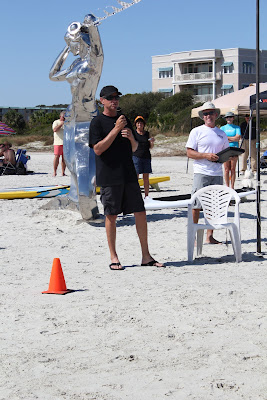 Notice that sculpture behind them? Our 7 year old son got a hold of our camera unbeknownst to us and this was the result. He took 20 more pics just like it. I thought it was funny, Kris not so much. 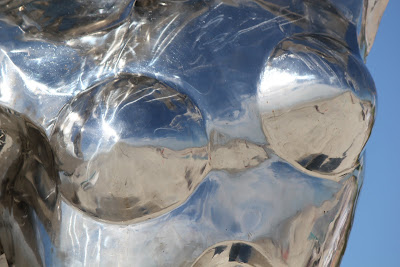 Off to battle. I love the shape of my Surftech Bark Competitor 12'6" race board. 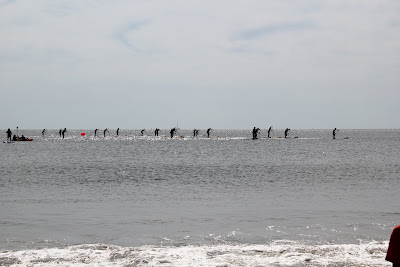 The boys being boys 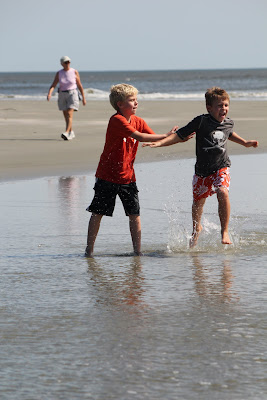 McIntyre races to the finish. 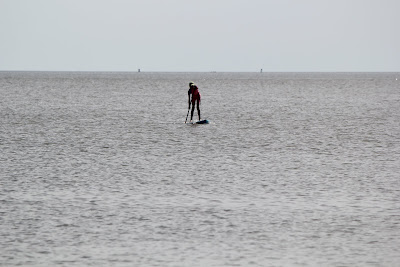 At 12 yrs old, she finished 3rd place in the Recreational 3 mile Women's Race Board 12"6" & Under Division. What a great follow up to the recent Stand Up Journal article. 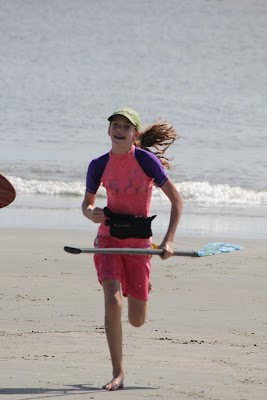 This is me headed to the finish in the Men's Elite 12'6" & Under Division. The 1st & 2nd place finishers were Packet Casey (Jimmy Lewis team rider) & Ian McFarland (formerly with Starboard), both from Florida and two of the east coast's fastest paddlers. I had to fight for my 3rd place finish and hold off two other racers who stuck with me for most of the entire 7.5 mile course. 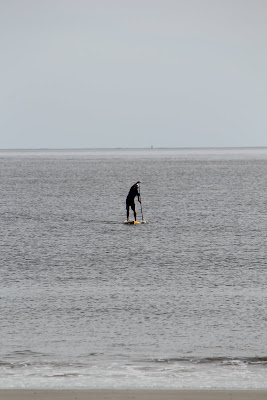 I left it all out there on the water to pull ahead of those two other guys towards the end of the race. My legs cramped up as soon as I hit the beach for the run to the finish. 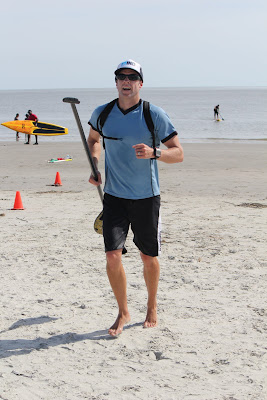 McIntyre with her awesome trophy 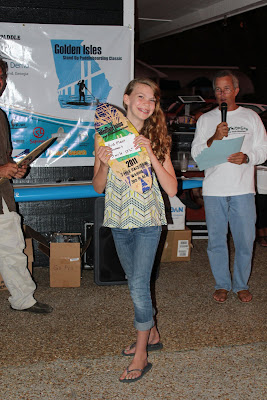 ...and as luck would have it, she also won the raffle give away for the brand new Jimmy Lewis 12'6" Blade race board. Big thanks to Jimmy Lewis and all the great sponsors of the event. Check her out with Davis Love III. 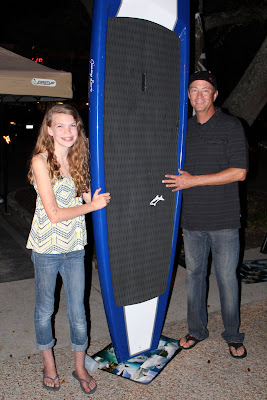 Proud papa with his girl and her new race board. It's a good thing I know something about carrying multiple boards on top of the family truckster...we brought an extra one home. 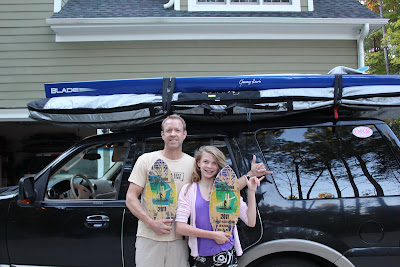 We got home as the sun was setting and just in time for her to break it in on the lake. Looks like it suits her! 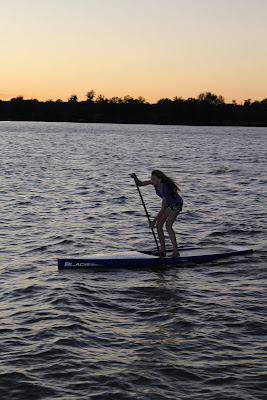 Here are all the 2011 Golden Isle SUP Classic race results.

Posted by Waterturtle at 8:56 PM

btw-janis and I call our family meetings, "Board Meetings" as they most always occur on sups

Your family keeps bringing home the gold. Sound like a fun event. That's cool that DLIII is into SUP.