Cape Hatteras doings (or "What I Did After Thanksgiving")

I hope everyone had a nice Thanksgiving. We sure did.

My family and I had originally planned to spend part of Thanksgiving week on Hatteras Island with some friends, however after some uneasiness by a few of us about the forecasted cooler weather at the beach, we bagged those plans and just did Thanksgiving with our friends at their place in Greensboro. Not to worry as I got the kitchen pass to motor on down to Cape Hatteras the day after Thanksgiving for the weekend. That day was forecasted for SW 20-25mph winds in the afternoon and NW 15-20mph the next morning. Plus, I had to pick up a new board I had already purchased...yeeha!

I arrive to pick up my new board around lunchtime, I continue on down to Canadian Hole to adjust the foot straps, and wait on the forecasted wind. I see some white caps, there's a puff of wind....could it be coming now? NADA! I got skunked! Apparently, the soundside water was too cold for the warm southwest wind and wouldn't pick up at the water's surface. Good thing I had my SUP board. I continued on down to the south facing beaches to see if I could catch some light wind wavesailing. The wind was barely blowing...not enough wind to power me through the surf and the waves were too disorganized for stand up paddling. Dangit...I was going to get on the water somehow so I just put in soundside at Isabels and went for a flat water paddle. I did capture a golden sunset when I came off the water. 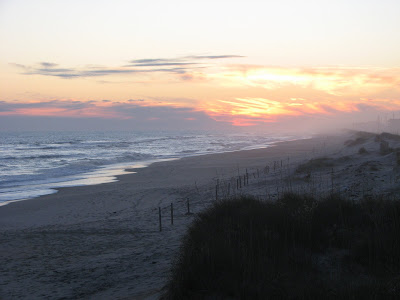 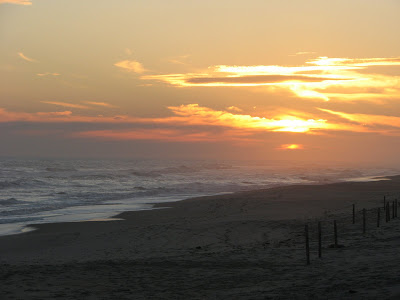 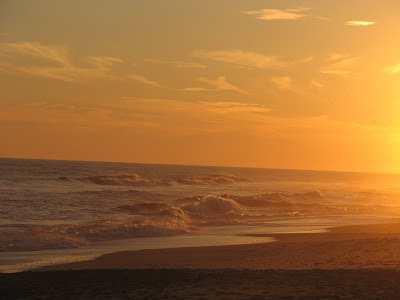 That evening, I hooked up with my friend Don for dinner. I used to live in Greensboro and was part of the Triad Windsurfing Club. I met Don through the club and he continues to be an active member there. He and his wife Debbie go to Cape Hatteras as much as they can to windsurf and fish. I was hoping to get some time on the water windsurfing with Don and Debbie, just like old times. But it was not to be...but it was good to grab some dinner and catch up with Don (Debbie was off shopping all day for Black Friday).

The next morning, the forecast continued to change to a very light NE wind so I headed back to the south facing beaches again for some stand up paddle surfing. There were some decent knee to waist high waves...standing up a bit from the offshore breeze...and no chop. Perfect for me since I'm really still learning to stand up paddle surf. I started near the Frisco Pier for an hour, then decided to drive out on the beach up towards The Cove. I found some more decent waves about halfway to The Cove. I surfed for about another hour. All in all, it was fun even though there was a light rain for most of my sessions. I fell a lot...I'm definitely still learning and trying to get my confidence back from my lower back issues this past summer. I was able to catch and ride a few waves that morning, so it's getting better, the confidence is coming back, and I had fun out there. The water wasn't too bad in my 5/3 suit, gloves, and wetsuit tobagan (even though its in the low 50s right now).

It sure was nice to drive on the beach and find some space with no one around. There were some fishermen out but space was aplenty. On my drive out to check The Cove, I unfortunately came across a dead dolphin that had washed ashore. There's no telling how it died but it appeared to have some wounds...perhaps from a shark? Could have been attacked after it died though....who knows. 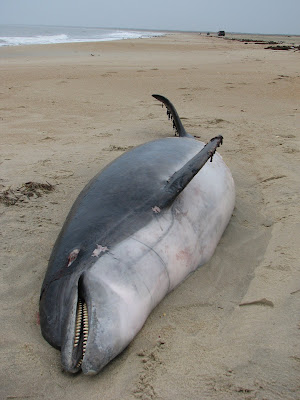 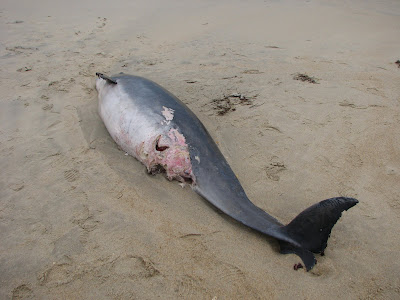 Speaking of which, a dead great white shark was recently found washed ashore on Morris Island, SC (near Hilton Head/Charleston). It's a mystery as to how it died as there weren't any apparent wounds on it. Thanks to Glen for first posting this. This picture was lifted from the news article and was taken by Josh Loefer.

I saw The Gypsy Dane parked on a big trailer at Ramp 38 in Avon. The Gypsy Dane is a 50 ft ketch that washed ashore in Avon two weeks ago and has been keeping Hatteras Island abuzz since then. Andy posted this story as it happened here and here.

A French National living in Canada, was sailing down to Charleston on the boat, had some initial trouble offshore Virginia and rescued by the Coast Guard. He continued on his way and apparently had gone under deck for a while, came back on deck and found he was washed ashore at Cape Hatteras. Welcome to the Graveyard of the Atlantic. It's a sad story as this poor guy had to sign over the boat to a moving company so they could move it off the beach. He apparently couldn't afford to pay them (or just wouldn't pay them...unsure which). Read the entire updated story here in the Island Free Press, with more pics.

Here are some pics I took: 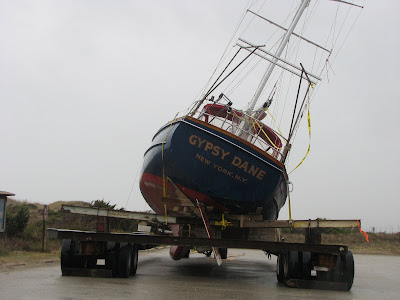 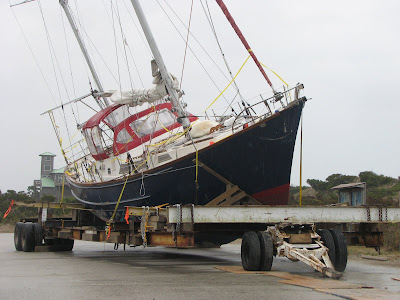 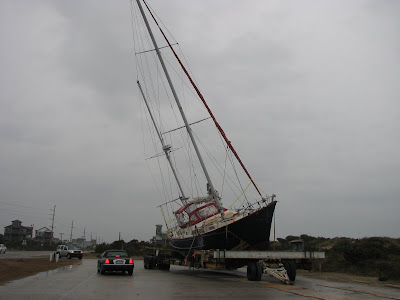 Other Outer Banks happenings: As I drove over Oregon Inlet and the Bonner Bridge, I noticed the big dredging ship out there again. It was there last Memorial Day weekend. When reading the local "Coastland Times", I discovered that commercial fishing vessels haven't been able to pass through Oregon Inlet because its too shallow. It filled in (again) after the last two nor'easter storms in late September and October. They hope the current dredging will have it deep enough in a couple more weeks. The article said boats in Wanchese are going out of Beaufort Inlet and taking 24 more hours for their trips, instead of the normal 4 hour return trip. I'm wondering why they can't go out of Hatteras Inlet.

Speaking of the Bonner Bridge, I also read it was decided the shorter option replacement bridge would be built. It will sit on the west side of the existing bridge and work is supposed to be completed in 2014. In addition to that, they are planning to build short bridge sections over the trouble spots on Highway 12 leading into Rodanthe.

Finally, the big topic this year has been beach access. The National Park Service's Negotiated Rulemaking Committee is back at it and trying to come up with a long range rule for ORVs on the Cape Hatteras National Seashore. Don tells me the local economy saw a 30% decrease in business and is suffering. He thought there were between 9-13 piping plover nests this year. Many people who came this past summer and discovered they couldn't drive on the beach didn't renew for their normal rental weeks in 2009. Wow...local economy vs 13 nesting birds...birds win. Or did they? I wonder how they fared during the September storms.

Things sure are changing on the Outer Banks. Even the movie theater in Avon is closed. And Real Kiteboarding has a new behemoth store building in Waves and appears to be building condos next door to it.

After I came off the water on Saturday, I checked the forecast and found rain for the next day or so. I decided to go home early and spend Sunday with my family. The rain chased me away. 2 days at Cape Hatteras stand up paddle surfing in rain is better than most other days not at the beach...so no complaints whatsoever. It's still a beautiful place...even in the rain. I'll be back for the wind another time. Signing off for now...and definitely giving thanks for many things.
Posted by Waterturtle at 4:08 PM 8 comments: 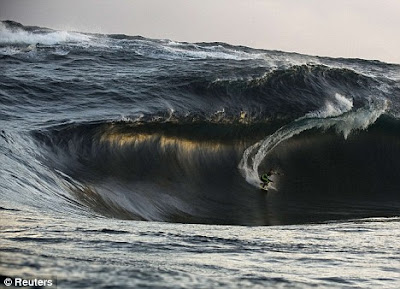 My first reaction when I saw this picture was "Holy $%@#!" Look at the thickness of the wave and how it doubles on itself as it pitches over.

This picture is courtesy of Reuters and found here at dailymail.co.uk along with an article about it. This apparently took place at a secret outer reef off Australia.

And here is a short 4 minute interview (along with some brief action clips including him windsurfing) with big wave waterman Laird Hamilton, who has been promoting his new book.
Posted by Waterturtle at 9:22 PM 5 comments:

GoPro Video from San Carlos - made by Taylor Congdon

Thanks to Josh and Windsurfing Magazine for posting this and linking to GoPro Camera's web site which had it first.

Taylor Congdon is mostly known as a motocross filmmaker, but he has been windsurfing since age 11 and has been going to Punta San Carlos for a long time. He was there with pro Kevin McGillivary the same week our crew was there. Here is a cool video he put together from GoPro camera footage he took from his boom and helmetcam mounts. As you can see, Taylor rips. Enjoy!


The Best Windsurfing Video Ever. GoPro. from GoPro on Vimeo.
Posted by Waterturtle at 9:00 PM No comments: