In the 3 winters before this one that I've lived near the lake, we had so many great windsurfing days between November and March. This winter has been terrible by comparison. It's been the coldest winter in this area in 30+ years. When the wind was blowing, it was too cold (by our NC standards) and TOO windy...that's right...gusts over 60mph that blew a friend's boat dock/lift over...with the boat in it.

Just the other day, I was saying to Rob, "is it too much to ask to get some wind on a 50 degree sunny day?". The answer was apparently "sort of" as we finally hit the water today in 15mph+ wind on 8.0s...but with the air temps not quite getting to 50. But the sun was out, which the made it seem nicer out. We had 2+ solid hours of fun slalom blasting. Sorry, no pics...just focused on the sailing. Besides my Florida session in January, I think I windsurfed two other times since November. So I was grateful for today.

Just saw Canada win the gold medal in hockey...what a great game. The Olympics are done and it went by so fast. Look at what Winter Olympic U.S. ski medalist Julia Mancuso does for cross training. Found this posted on StandUpZone. She also windsurfs....check it out at Windsport Magazine. 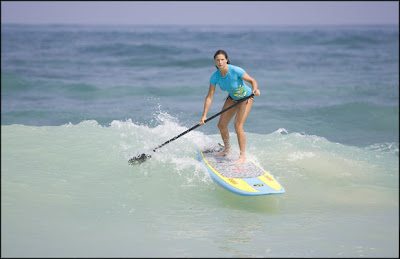 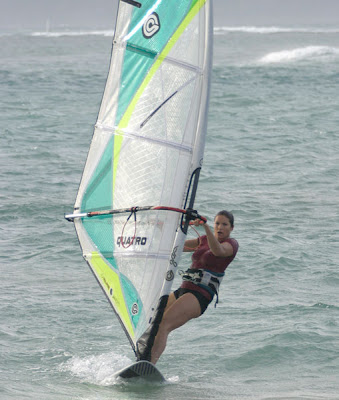 Posted by Waterturtle at 7:44 PM 3 comments: 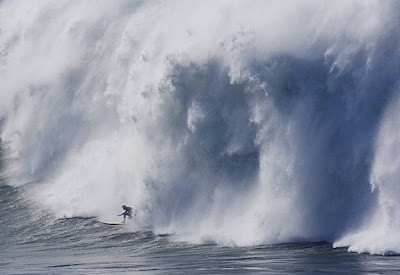 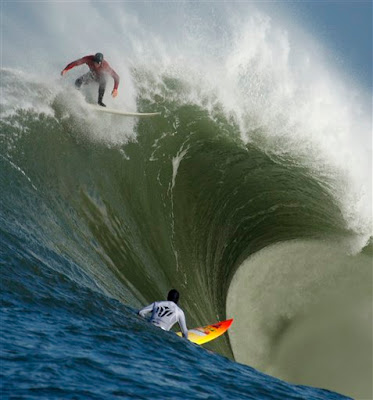 Sound system, leaderboard, and some spectators were taken out by a rogue wave.
Posted by Waterturtle at 8:48 PM 1 comment:

Just polished off 3 books over the last several weeks about some very fascinating people...

For Christmas, I got the Gerry Lopez book, "Surf Is Where You Find It". It is an outstanding collection of Lopez's best (non-fiction) stories over his surfing lifetime so far. With a mix of a fireside chat style of storytelling intertwined with humor, he gives you a sense of what it was like to grow up in Hawaii in the 50s (what a time that must have been!), he takes you behind the scenes of "Big Wednesday" and hanging out with Jan Michael-Vincent, surfing with Miki Dora, pioneering Indonesian breaks before it became known as a world-class surf spot, keeping up with Laird Hamilton, his foray into snowboarding, and of course...there are some great stories about Pipeline. There is also some great wisdom to be taken from this book that can be applied to any adventurous endeavour in the water...such as this little nugget:

"The inner self is a part of each of us, and holds answers to complete happiness and life free from pain and suffering. This inner place of harmonious bliss is layered over with ego, individual belief systems and mundane concerns. We live in the past where nostalgia makes us sad, or in the future where our worries cause us anxiety. We fail to grasp that this moment we are in is all there ever was or ever will be. Life is, was, and ever will be, simply now. Moments of surf realization are here to remind us of our true potential. If that is why we surf, that's good because surfing reconnects us to who we really are. This is all the more reason to keep surfing. Life is good. Surfing reminds us of how good life is."

And my favorite: "The best surfer (insert windsurfer, kiteboarder, stand up paddler, etc here) in the water is the guy having the most fun". Amen to that.

Here is Lopez talking about SUP

The second book I read was "The Last American Man", written by Elizabeth Gilbert. Gilbert made her big mark as an author with "Eat, Pray, Love". Before that, she had written "The Last American Man" in 2002. This is the true story of Eustace Conway, a modern day Daniel Boone/Davey Crockett who followed his dreams and lives completely off the land. Conway grew up in NC playing in the woods behind his house and mastered just about every outdoor skill known to man. At age eighteen he paddled the Mississippi River in a handmade wooden canoe, then he hiked the Appalachian Trail surviving only on what he hunted and gathered along the way, hiked across the German Alps in sneakers, kayaked across Alaska, scaled cliffs in New Zealand, lived with the Navajo in New Mexico, lived in a remote Mayan village in Guatemala, broke a world record by crossing America on a horse in 103 days, then did it again in a horse drawn carriage. Over time, he acquired and pieced together an adjoining thousand acres in the NC mountains and turned it into his own kingdom of self sufficient living. He continues to be an activist and tells people, "yes, you can do this too"...although 99.999% of us could never hack it. It's a fascinating story of how a guy like this has blended into the realities of American life with all our luxuries and capitalism. I've been in NC my entire life and never heard of Eustace Conway until I got this book. A great read.

Last but not least, I just finished a biography of Clint Eastwood, one of my cinematic heroes. The book is called "An American Rebel: Clint Eastwood" written by Marc Eliot. It follows Eastwood's life both personal and business. I didn't care too much for the personal stuff as I was more interested in how he rose from TV actor in "Rawhide" to becoming an accomplished actor/director/producer. I didn't realize he directed 30 movies, most of course which he starred in. I love how the book described his style of moviemaking, which is going on a lot of instinct and being efficient on the set such as consistently getting scenes in one or two takes. It's fascinating how Eastwood made some of his best movies (Mystic River, Million Dollar Baby, Gran Torino, etc) in his 70's...well after a time when he didn't have to make any more movies.


That classic "Do You Feel Lucky" scene from Dirty Harry -

A few of the NC Lake Crew are sprinkled throughout the video...what a great event held by Coastal Urge...their 2nd Annual Intracoastal Cup race is May 15th.

Posted by Waterturtle at 7:10 PM 5 comments: