I recently had a business trip to the Silicon Valley area and found myself with a few free hours once I landed at the San Francisco airport.   Less than a week after the Mavericks Invitational ran, a nice swell was still pumping.  The forecast showed 7-8 ft swell (well overhead surf) and slight offshore WNW wind + clean conditions for most of the Santa Cruz area beaches.   A call to the one SUP shop in Santa Cruz that I knew about, Covewater, confirmed it.  It was time to seize the moment.

I took the scenic route down Highway 1, starting in Half Moon Bay, the home of the world famous Mavericks break.  No time to stop and look at it.  I had watched some of the Mavericks Invitational live webcast the Friday before and felt like I had been there.  Plus, that break is at least ½ mile offshore from the harbor/point and I wouldn’t have had a good view of it anyway without a long walk.  And I don't think it even breaks in 7-8 ft swell?

The drive down was beautiful.  I knew we were getting our first snowfall of the season back home as I opened the sunroof to soak in the long anticipated sunlight.  Sunny and 60s with water temps in mid 50s had me rushing southbound.  My view to the right on the way south was nonstop corduroy lines making their way to the shore.  I stopped by Waddell and Davenport Landing beaches to check it out.  There was a little bit of wind on these west facing beaches with pumping surf, validating the earlier forecast I read.  It was on to Santa Cruz.  I pulled up in front of the Covewater Paddle Surf shop and went inside.

Megan was very helpful.  She showed me the large selection of rental SUP surf boards and I selected a 9’5” Jimmy Lewis with tri fin set up.  She found me an XL wetsuit, a leash, and paddle.  My one request was to send me to a surf spot that was SUP friendly and where I wouldn’t get the stink eye from prone surfers.  She gave me directions and advice on parking, I paid what I think was a relatively low rental fee that included the wetsuit, and I was on my way after throwing the board and paddle inside the rental.

Truth is, I thought ahead about this.  Knew it was a real possibility.  In my carry on bag were my booties, compression shorts and rashguard to wear under a wetsuit, as well as a lightweight camping/travel towel.  I was prepared.  Only the rental XL wetsuit was still a little small on me as I was soon to find out as I put it on outside my rental car a block from the beach.  I didn’t want to kook out in Santa Cruz but the high water ankle cut and sleeves that came well short of my wrists gave me away.


When I walked to the cliff overlooking the beach, it was a sight to behold, a nice right hand point break with tons of room.   Only thing was there were many others there to enjoy it as well.  Welcome to Santa Cruz.

I scanned the situation here.  There were a couple of outer breaks, a middle break where the wave reforms, and an inner shorebreak.  The distance from the far outer break to the beach is about the length of seven football fields (estimated by looking at Google Maps and a nearby football field).  There were surfers spread out across all four breaks.  And those surfers included everything – shortboards, longboards, a surf kayaker, and couple of boogie boarders, and also other SUP’ers.

I had some anxiousness - east coast inland average Joe who only gets to surf an average of maybe 10-15 days a year, getting ready to hit the water in one of the west coast’s premier wave spots.   Even though I’ve had experience in point break waves from trips to Baja and a lesser known spot in Central California, this was going to be a different experience in a big surf town.  Breathing deeply, I drew on my experience and told myself to be patient.

From windsurfing experience and the past 6+ years of SUP surfing, I had studied and knew the rules of the wave, the etiquette, the way its supposed to be.  Know who has right of way, don’t snake someone else’s wave, don’t shoulder hop, don’t hog all the waves, be patient, give up some waves to others, be respectful, and don’t kook out.  However, I’m used to surfing a wave on the east coast that I don’t have to wait for very long.  I might be solo, or there might be one or a few others with me.  Even if there are a bunch of prone surfers on the best wave, I'll move down to the next peak so I can have it all to myself.   This was the first time I would have to really be totally conscious of the wave etiquette….so many surfers….so many strangers to piss off if I didn’t act accordingly.

It took me at least ½ hour after walking down the cliff stairs and entering the water to get my first wave.  I had to watch the others, where they were lining up, and wait my turn.  It was the middle break and that first wave was ok, a good little warm up.  I could tell the actual 7-8 ft swell forecast was really at the very outer break…well overhead…maybe double overhead on the big sets.  The waves wrapped around the point and got smaller in size as they formed on the inner breaks.  Perfect – the nice sets were coming at about head high, some slightly bigger.

After about 1 hour and only a few decent waves caught, an opportunity came and rewarded me for my patience.  I had by then moved to the 2nd outer break and was now almost in the right position.  I somehow found myself with very few others around and a big set coming.  There were a few surfers already on some of the waves riding them in from the far outer break.  They passed by and an overhead wave came, empty of surfers.   I spun around and went for it.  This was the longest and maybe the biggest wave I’ve ever surfed.  I rode it all the way to the beach (probably close to the length of five football fields), right down the line, dodging other surfers paddling out, and hitting the multiple top and bottom turns.  Leg burn and a big quiet “whoop!” to myself as I pulled out of it just before shore break.  I looked at the first surfer I saw as I was paddling out and, not being able to contain myself, with the biggest grin said “I’m from the east coast and that was awesome!”  He grinned right back at my total kookness, laughed and said “right on”.  The aloha spirit was alive and well in Santa Cruz.

I realized it was now low tide rising and it looked like the waves were getting better.  The paddle out was long and I didn’t even get back to that 2nd outer break because a bunch of great waves were hitting the middle break.  Every time I paddled back out, I would find myself with a nice empty wave to catch at this point.  So I spent most of the rest of my time at this spot and enjoyed myself fully.  2 ½ hours and I was spent.  Eternally grateful after catching many waves much longer than most I’ve surfed on the east coast, it was also time to get the rental gear returned to the shop before it closed.

After returning the equipment, I drove to the world famous Steamers Lane surf spot to take some pics and enjoy the sunset there.  The waves were big, overhead to almost double overhead sets.  Watching the surfers and soaking in the easily apparent surf town culture, I thought back to the prior few hours.  I realized it was my patience and rules of the wave knowledge that provided for such a great experience.

Below are two great links to rules of the wave for SUP surfers.  Had I not followed the rules and been impatient, it could have been a disastrous experience for myself or other people out there on the water that day.  I'm not really patting myself on the back (ok, maybe a little) but I mention this only because I think its very important for all SUP surfers who don't have many years of surf experience (inland folks like me) to be very mindful of how and where they surf.  Again, not a lecture...I just want everyone to be able to share the water, all get along, and not get SUP surfing banned (this has happened at certain beaches and in danger of continuing).  There are already enough prone surfers who aren't fans of SUP surfers.  So here you go...check it out:

Lets just say that my work the next few days in CA was more fun (and hard at the same time thinking about those waves).

I warned you not to read this, didn't I? 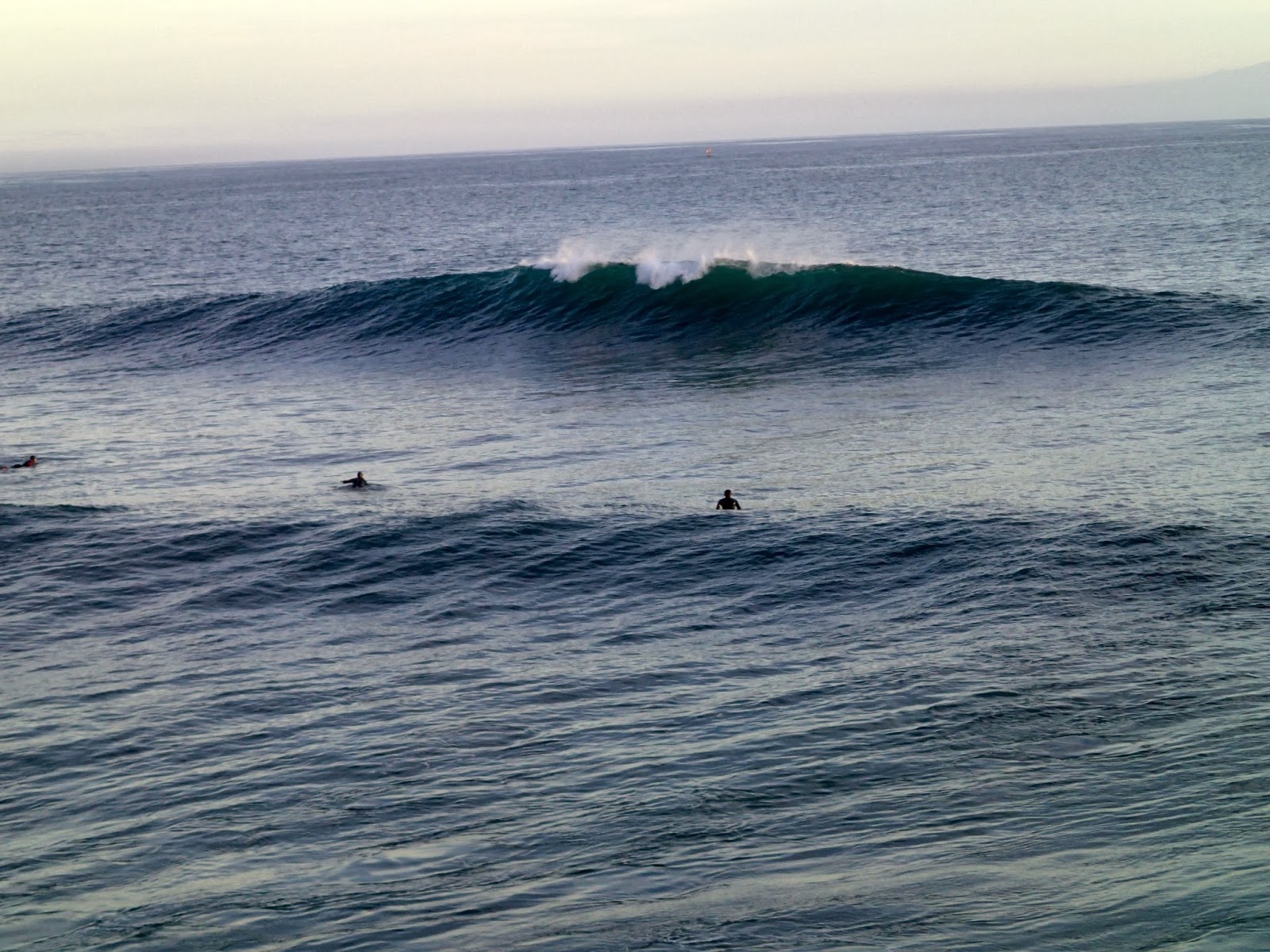 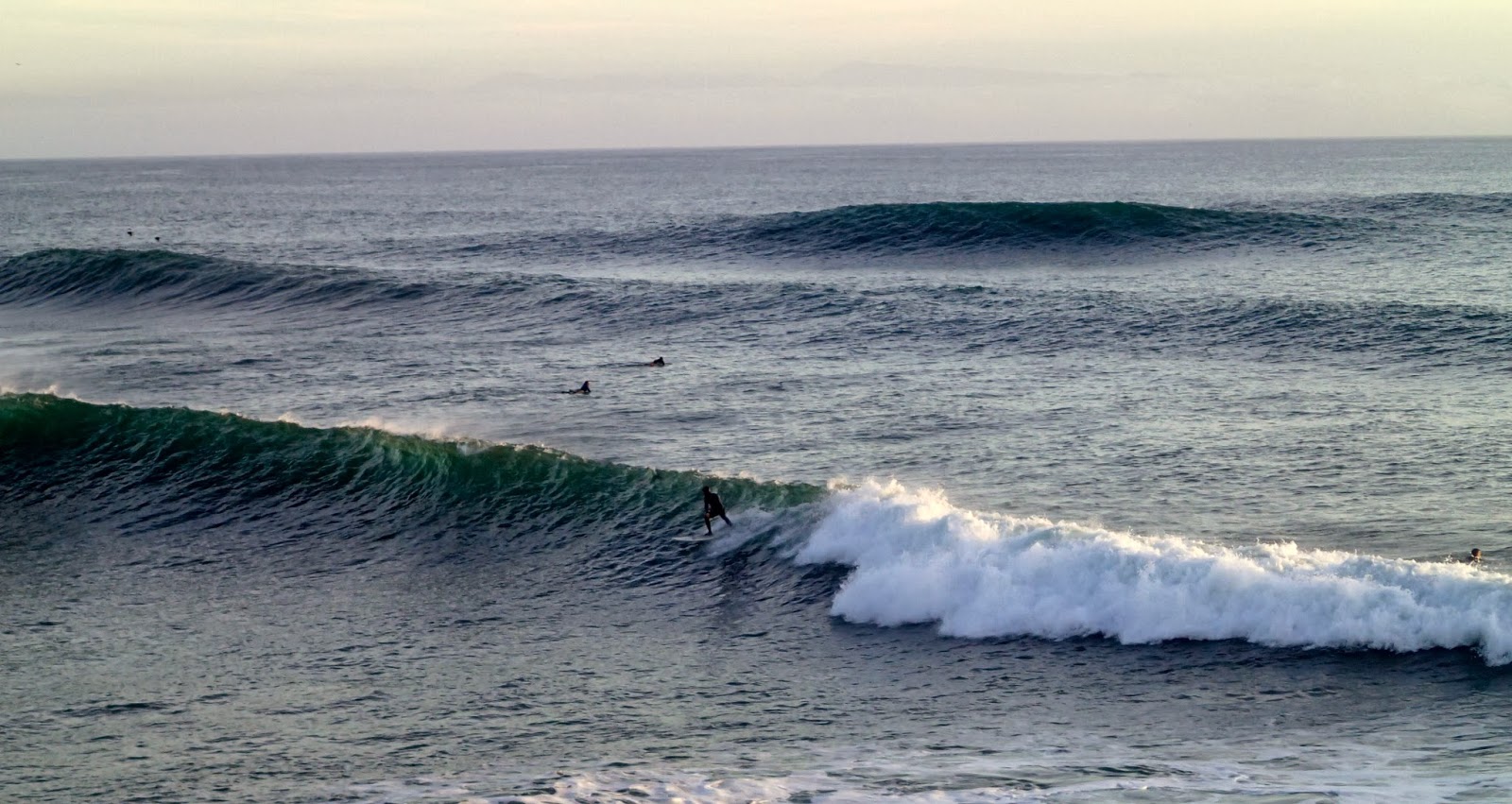 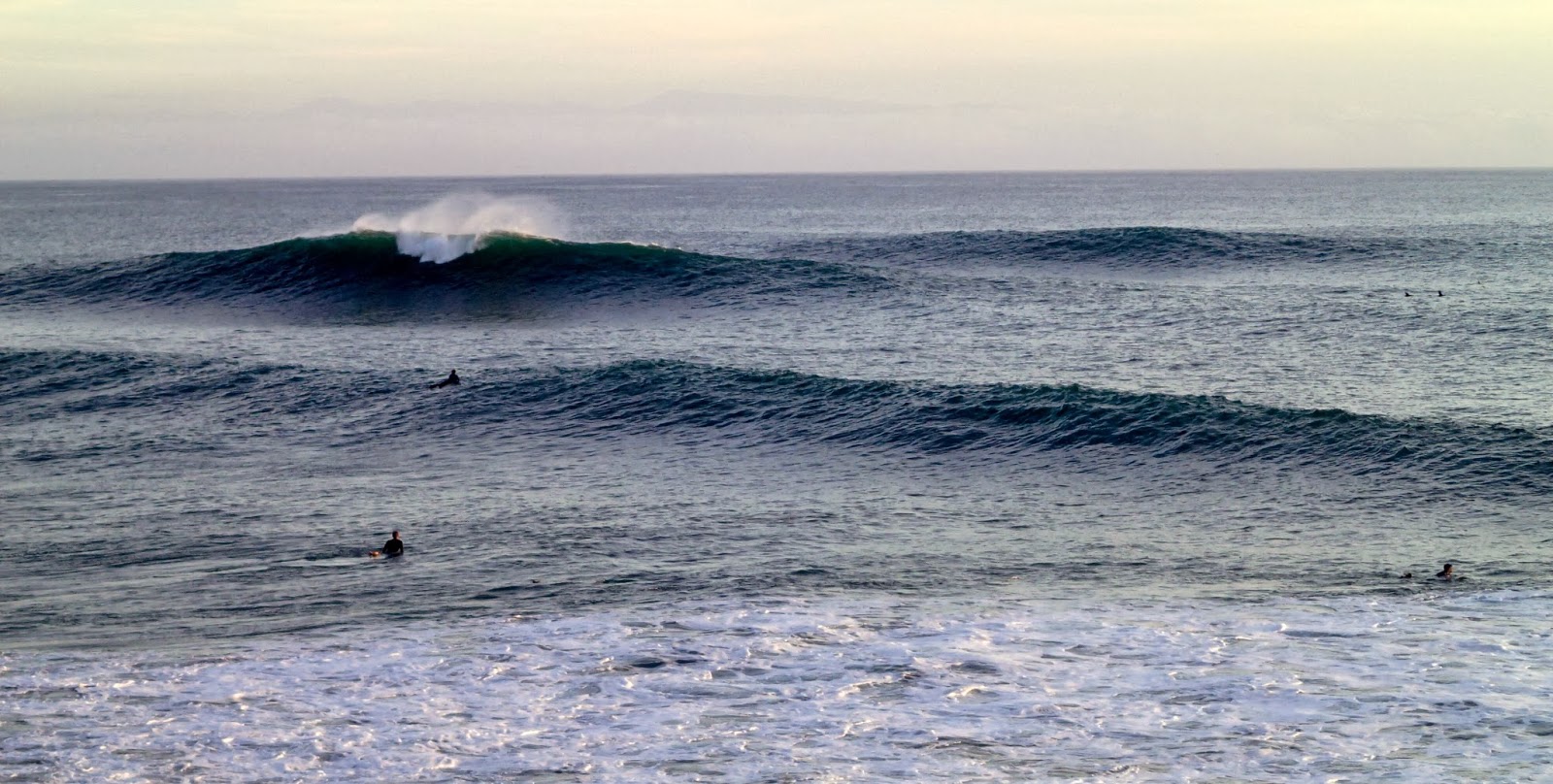 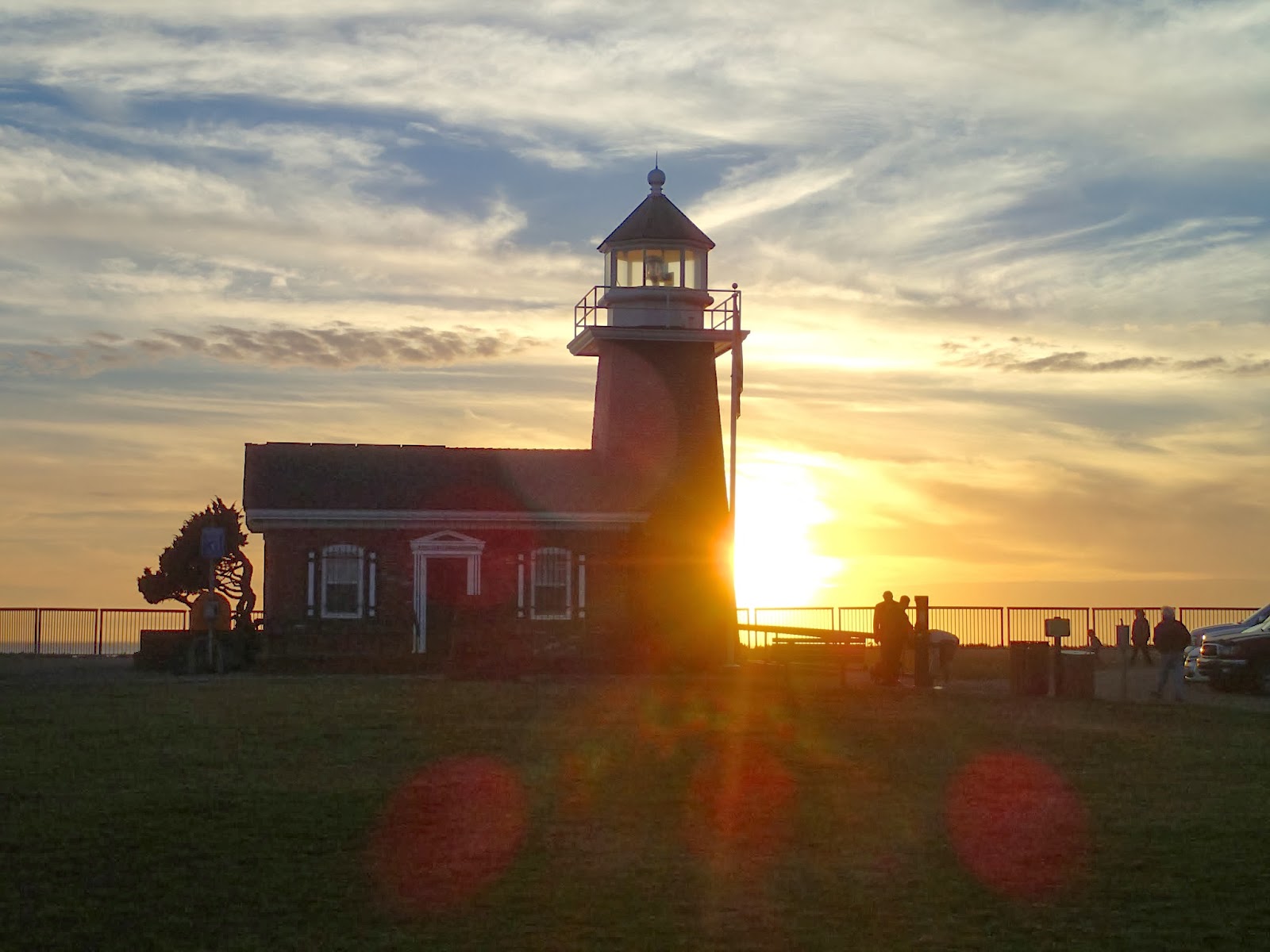 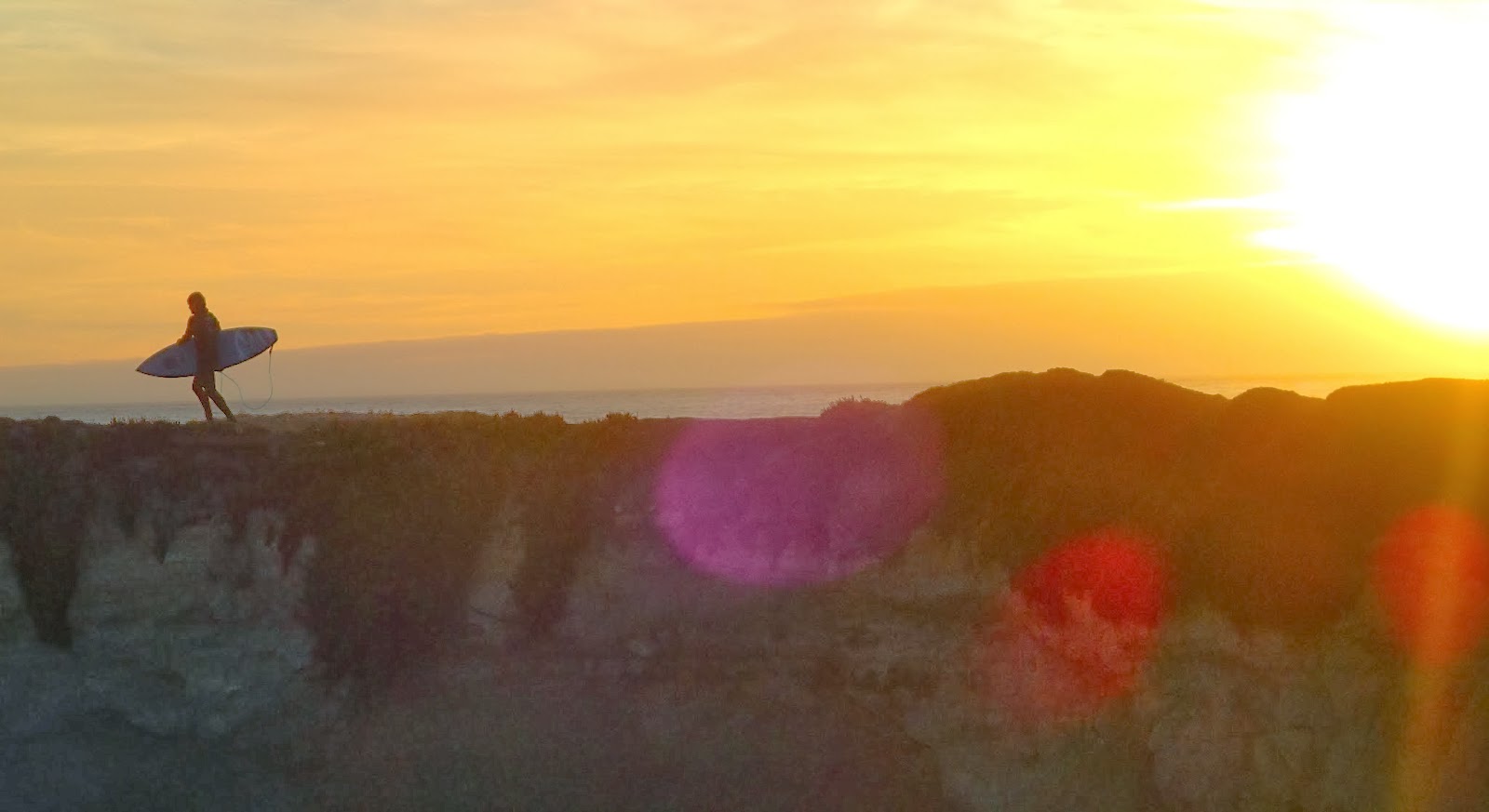