First, I've been remiss in mentioning the upcoming Hatteras Wave Fest 2008 event that OBX Bill has organized. It will be held September 15 - 29, 2008 oceanside on Hatteras Island. The event will consist of three elements which include: Freeform wave sailing, Wave Clinic, and Wave Challenge competitive event. Click on the link above for more details. Thanks to Bill for organizing this and getting the competitive juices flowing again on the Outer Banks....it's been awhile.

Speaking of Bill, he put together a great video of the Loop Fest event he also organized. Check it out here along with some other videos from others. Oh yeah, and our very own Donald makes an appearance in Bill's video as well.

Second, I'm off to Punta San Carlos this weekend. I'm a beginner wavesailor, so this will be a great learning experience for me...and one heck of a trip. I hope to post some updates and pics as next week progresses, so check back. Charlie from Ride Hatteras put together this cool 1 minute video from his trip there last winter. If you can't open it from the link, copy and paste this link into your browser and the video should start automatically: http://www.ridehatteras.com/videos/sancarlos.mpg

Last week, with remnants from TS Fay, some of the local crew traveled to the Charleston area and wavesailed at Isle of Palms. Here are some great pictures of Alan and Donald, along with Charleston area resident, Dave. Pictures taken by Donald's bro, Tommy.
Posted by Waterturtle at 7:29 PM 1 comment:

Lets list the recent blogger casualties, shall we?
Aaron's ribs
Andy's hand
Stuart's ankle
Mark's board
Josh's leg - don't read if you have a weak stomach
Bill's sick truck got a new engine - this counts since its his windsurfmobile and it kept him out of some action too.
Stuck in Duck Billy's ruptured disc

Each of these people took carefully calculated risks in conditions that weren't beyond their abilities, yet things do still happen sometimes and they suffered relatively minor injuries.

As opposed to this guy - every windsurfer and kitesurfer around the world who was watching the news or internet this week knows about Kevin Kearney and how Mother Nature (Tropical Storm Fay) defeated him in a big way. For my family and friends who haven't already seen this, check out this scary video:

WKRG.com Video
Amazingly and thankfully, Kevin will live to see another day, but he is very lucky. Lesson learned - don't ever kitesurf in a tropical storm, or any storm for that matter.

Then there is me. I can't get hurt windsurfing. I get hurt just doing the dishes.

My back is in bad shape. 1 1/2 years ago, I was diagnosed with degenerative disc disease. My two lowest lumbar discs have degenerated. Since then, I have been doing tons of core exercise and staying in pretty good shape with no problems. I've been very active in windsurfing and biking the last 1 1/2 years with no issues.

About 6 weeks ago, my back went out on me at home. I bent over doing the dishes and BAM...it hit me. I think not having been able to exercise since my hernia surgery in May made my back weak and vulnerable. Immediately after this episode, I went to the doc and got a steroid epidural injection to mask the pain so I could work and get around. I starting exercising again 2 weeks later including the SUP session with Rob at the lake with no problems.

Then my family and I spent a weekend in Beaufort/Emerald Isle area. That Saturday morning, I was stand up paddle surfing in the waves. I did fine except for the fact that it was a major workout and I was literally out of breath and my heart racing due to me being out shape since hernia surgery, etc. But I caught a few waves and it was fun. Then, that Sat afternoon, the wind picked up to around 15mph straight onshore. Despite the onshore wind and the crowded beach, I put the 5.4 sail on my SUP board and did some light wind wavesailing. I didn't stay out long because it was difficult to get upwind out past the breaking waves and then catch them coming back in. However, I did catch a couple of good wave rides and then packed it in. I was feeling good but tired (it was also very hot).

The following Sunday morning, I went back to the beach for one more stand up paddle surf session. The water was a bit choppier than I wanted due to a light breeze. But I went out with the paddle and found myself struggling a bit....off balance, falling in, etc. And then....BAM....my back went out again. This time, it was more painful than the last time. I saw the doc the following Monday and started icing it, taking prescription meds for the pain, etc. Since then, I've even been trying acupuncture. The combination of time, prescription meds, and acupuncture have me feeling better, but still having some weakness, stiffness, and some pain in certain positions.

In one more week, I'm supposed to depart for Punta San Carlos, Baja Mexico. There was a point I didn't think I would be going because of my back. I was in a serious funk about it and struggling with what to do. This is one of those top 10 trips I've had on my list for a long time. A trip of a lifetime. But now, I may not even be able to windsurf. I think I'm still going to go and just take it very slow, and ease into the windsurfing depending on how I feel. We have a great group of guys going so I'm looking forward to the camraderie. At the very least, I'll hopefully get some killer pictures and video and put something really creative together that I can post here. I probably won't be doing any prone surfing because of the hyper extension on the back and I probably won't be doing any SUP surfing unless it's really glassy and the waves aren't too big and I'm feeling good, then I might get out there. I feel like I could windsurf if my back is feeling ok, but I'm just going to have to listen to my body. Mountain biking is a maybe....I definitely won't be at my best.

I've never felt pain while windsurfing. I feel some pain afterwards sometimes, but nothing major..just normal muscle soreness from not having sailed in a while. Stand up paddling on flat water is great core exercise and doesn't seem to hurt my back. Stand up paddling the waves is also great core exercise but also has sponteneous and unexpected moments of putting you into positions that can hurt your lower back if you're not careful. I've talked to some folks on the SUP Forum and they all say SUP'ing is good for the back and core when done properly (stance, paddle length, etc) but like anything else, you can hurt yourself in different ways when not careful.

Don't feel sorry for me. It could be worse and I'm a fortunate man in so many other aspects of my life compared to folks I know who are fighting cancer, or have lost children, etc. Right now, my attitude is to just go, still have a great time, relax, and get some great pics and videos of my friends...even though I'm not 100% and may not be able to hit the water like I want.

Pain killers anyone?
Posted by Waterturtle at 9:08 PM 5 comments: 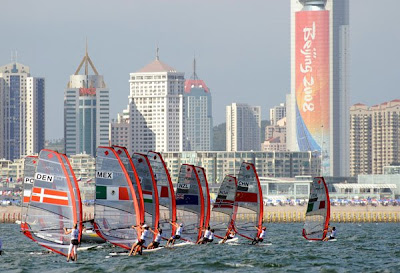 NBC's Olympic coverage certainly has brought us the big names like Michael Phelps and....well, Michael Phelps. Is there anyone else?

Well, for us windsurfers, our big names are Ben Barger and Nancy Rios. They are representing the U.S. in the RS:X Windsurfing Class. RS:X is the chosen one design class of windsurfing racing for the Olympics. The boards are wide, stable, and have an adjustable centerboard for lighter winds, but is also shaped to perform well in stronger winds.


Ben and Nancy don't appear to be in medal contention but are representing the U.S. with class. They have interesting backgrounds. For example, Nancy is a first generation American who helped raised her siblings. U.S. Olympic sailing and windsurfing hopefuls aren't given a ton of resources for their training, relative to what the other countries are providing to their competing sailors. Our sailors have to raise most of the funds required for training on their own. 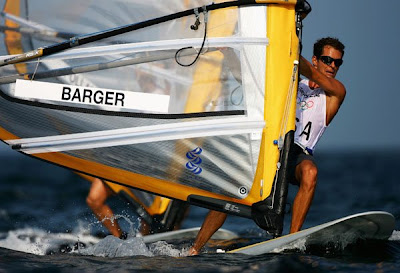 Ben is posting his Olympic experience here. And here is a video of his journey to the Olympics: 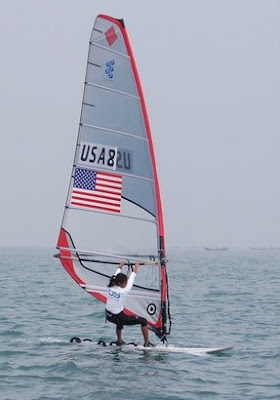 You can keep up with all the Olympic sailing results here.

Thanks to the International Sailing Federation for the top two pictures. The picture of Nancy (USA8) is from her web site. You can see more pictures here.
Posted by Waterturtle at 9:35 PM No comments:

Some of the local crew have been having fun in Oregon

The last post below has a great video of the best of the best at Hood River (The Gorge), Oregon. Some of our fearless local crew have been taking advantage of the awesome summer conditions there as well.

Alan, Donald, and Scott got it good a few weeks ago in Hood River. Here are some great pics from Alan.
Congratulations to Alan and Jen for getting engaged!

Alan returned to Pistol River on the Oregon Coast for some wavesailing and got these great pics.

Meanwhile, Josh took a nasty cut from a fin while windsurfing during his summer sojourn to Hood River. If you're faint of heart, don't click here. Heal Fast Josh!

Finally, my body is still a trainwreck, now with some lower back issues that have crept back up on me. I'll save the details for another post later. Trying to heal (and keep a positive attitude) so I can get back on the water.
Posted by Waterturtle at 9:14 PM No comments:

Found these at Continent Seven....

Windsurfing the Hatchery from Trudy Lary on Vimeo.
Posted by Waterturtle at 9:39 PM 1 comment: