Playing around with some 2011 video and captured some stills from the footage....some GoPro and some regular handheld. Thought I would post a few choice pics...
Hookipa, Maui
Mark Angulo committed bottom turn 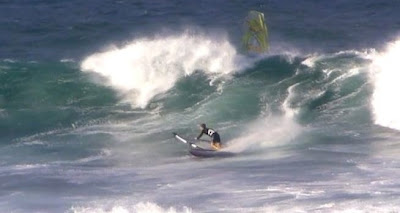 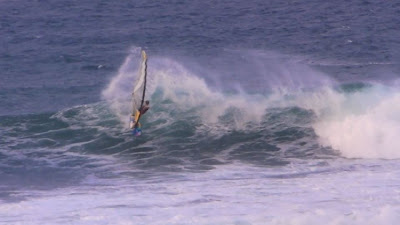 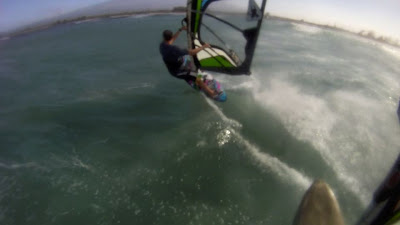 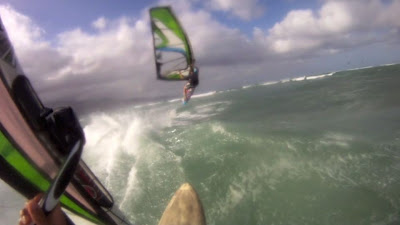 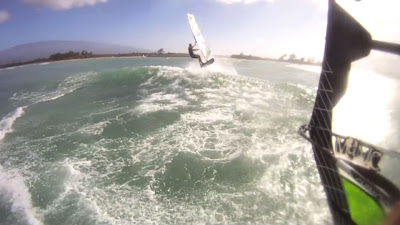 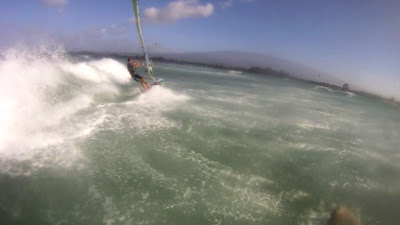 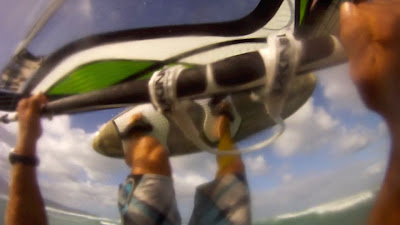 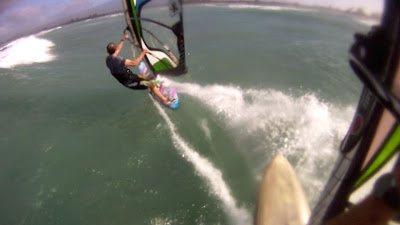 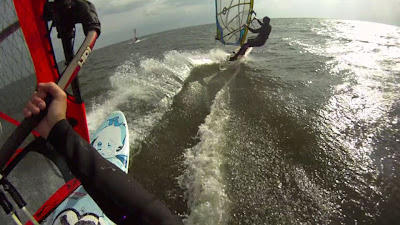 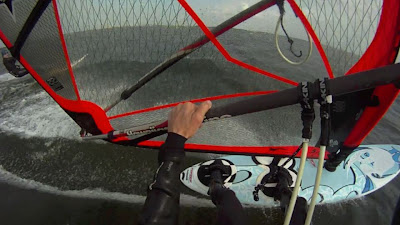 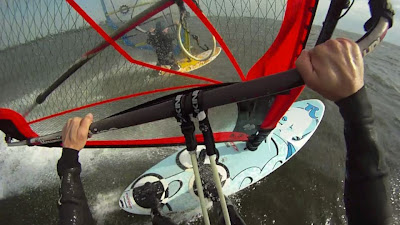 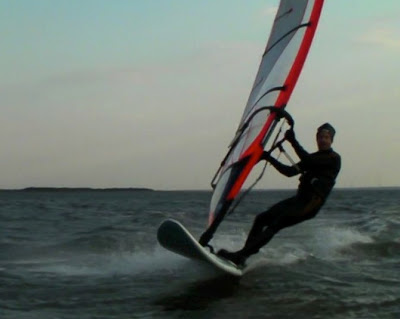 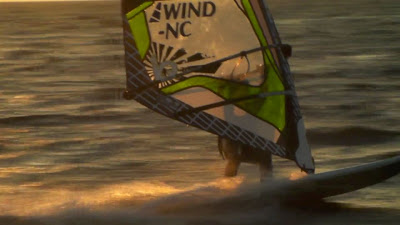 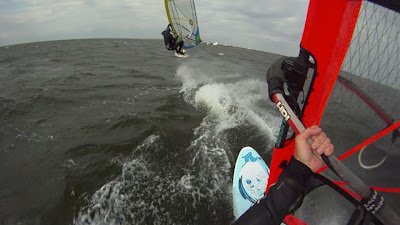 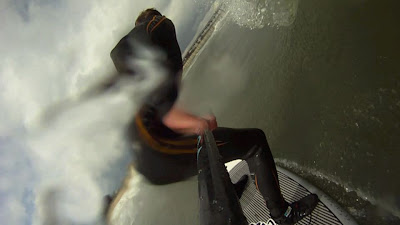 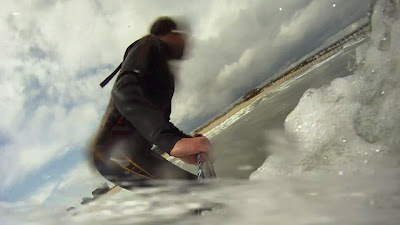 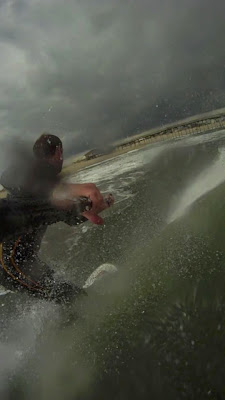 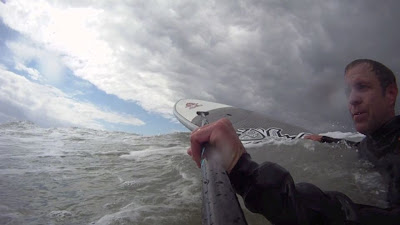 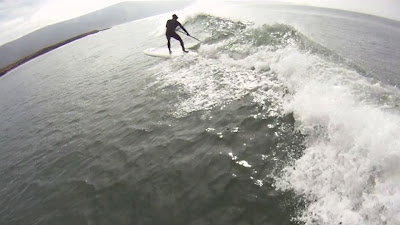 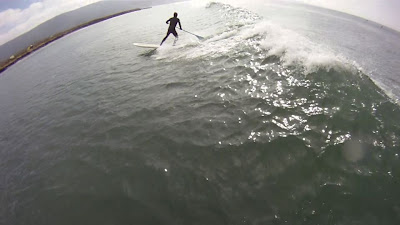 One year ago, our friend Karen Wrenn became the first person to stand up paddle across the entire California Channel Island chain. We've met Karen and her husband John a few times at a couple of the Coastal Urge races and also at the Tahoe Nalu race. Here is a pic of Karen with our daughter after one of those races (this pic appeared in the StandUp Journal Fall 2011 issue)... 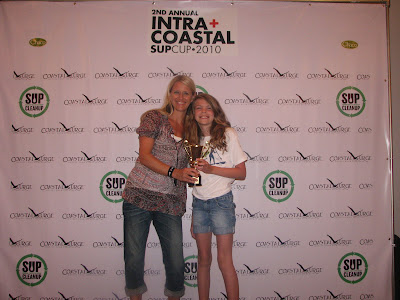 ...and here is an awesome video documentary of that crossing...

Anyone remember Chris Wyman, who was a pro west coast wave sailor back in the 90s? He was Karen's Crossing boat captain and works for Kaenon Sunglasses.

You can check out her blog posts about it right here.
Posted by Waterturtle at 5:54 PM No comments:

It's apparently a sin to leave wind for wind. But what about leaving wind for waves...then getting some wind there too?

My plan was all set. I had the rare kitchen pass and the rare opportunity for a 24hr road trip to SUP surf on Saturday. I unfortunately couldn't wrangle some of the usual crew to go with me as they all had other commitments, which ironically is usually the case for me. But my mind was made up to go because I was jonesin' big time for some SUP surfing.

Then something happened. Out of the blue, the local wind forecast picked up for Saturday. Forecasted NW winds 25-35mph. Dangit...now I had to choose. After much contemplation, it came down to this - I get more opportunities to windsurf on the lake and I wouldn't have regretted missing high wind windsurfing on the lake as much as I would have regretted missing clean SUP surf conditions. That's how bad my SUP surf itch was...and it had to be scratched. On a different day, I would have made a different decision and stayed local to windsurf. Just not this time.

I'm happy to report that I had a great SUP surf session and a bonus windsurf session. And the local lake crew got some great windsurfing in as well.

I ended up surfing with some of the local CB crew and had a great time. The waves were mostly clean and just over waist high with some chest high sets, which made for many fun rides and some long rides too. I'm finally starting to improve in my wave positioning, turning, getting in the critical section, and connecting sections for longer whole wave rides.

The sun made an appearance, air temps got well into the 50s, and the water wasn't cold...at least not shockingly cold like winter surfing usually is when the wetsuit gets flushed underwater. It was actually refreshing. The longboarders by the pier were getting plenty of stoke too with lots of toes on the nose rides. And a dolphin showed up towards the end of my 3.5 hr wave sesh.

Here is DW's blog post with pics of some of the local crew and conditions.

I then got a bonus in the afternoon with a brief 1 hr windsurf sesh at The Basin, a flat water spot off the Cape Fear River. Powered up in 15-20mph NW wind along the leeward side of the jetty made for some fun flat water speed runs and hero jibes.

Judging by the reports of the windsurfing back home, I'm sure I would have been happy if I had stayed, but I still would have been itching for the SUP surfing. Now I can chill until the next itch comes along which I'm sure will arrive again soon anyway.

Speaking of the windsurfing back home, here is some GoPro footage of what I missed...filmed by Alan White:

...and a pic taken from Alan's GoPro video...this is Raceboard Dude... 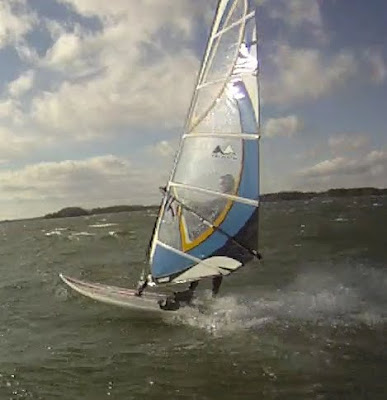 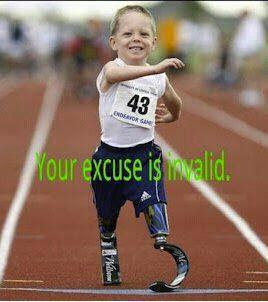 This is a message not only to anyone who might happen to be reading this blog...but also a self reminder for me.

...and if you think you have a hard time getting to your launch, or your launch stinks, or the wind/waves aren't quite right, or something hurts, or whatever makes you want to complain, remember that kid and this guy...

BIRTHRIGHT from Sean Mullens on Vimeo.

Posted by Waterturtle at 3:28 PM 2 comments: