Let The Wind Be Your Friend

I have a confession to make.  We finally got a windy warm Saturday a couple weeks ago and I chose to do a SUP downwinder instead of going windsurfing.  I could have windsurfed afterward for a twofer double-header, but had a youth volunteer commitment later in the day.  So I chose the SUP downwinder first.  Why?

I have been trying to figure out the best way to do SUP downwinder on Lake Norman.  After a couple of tries last fall, I was ready for a long one in the open channel with the right wind direction.  On Lake Norman, we have the ability to do a 10 mile downwinder in either SW or NE wind.  Technically, its about 11 miles.  And its actually about 9 miles of open channel beyond the wind line (= bigger wind swell/chop).  Here's a map depiction... 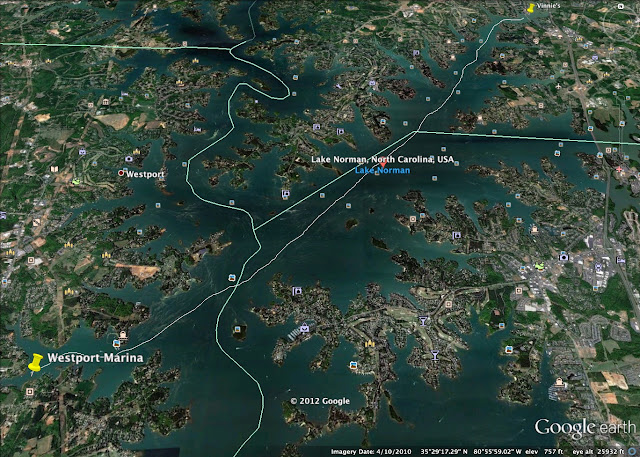 I still love windsurfing, but I also love SUP surfing and SUP downwinders.  Downwinding gives you that feeling of surfing....even if its just shin to knee high swell on the lake providing the ride.  The trick is getting yourself in the lowest point in the trough of the swell and connecting the dots from swell to swell.  We had SW wind 15-20mph so I took advantage of it...and had a couple partners in crime joining me - Matt & Mike.  We did the shuttle pickup and drop off thing, launched in Denver on the southwest side of the lake at a marina, then paddled with the wind all the way to Mooresville (Vinnie's) on the northeast side of the lake.

I can tell you afterwards that I want more and I want 25-30mph+ wind for a SUP downwinder.  Yeah, its that much fun.  We had a few lulls in the wind as you can see in the video but the swell was still rolling out in the channel, giving us some fun rides.  That middle 6 mile stretch in the map above has the biggest swells as the fetch behind you gets longer.  Who wants in next time?  (Don't worry windsurfing brethren - the sails will be making appearances again too!)

Here's a little 3 minute taste of the action from a couple weeks ago...

Let The Wind Be Your Friend from WaterTurtle Media on Vimeo.
Posted by Waterturtle at 9:33 PM 3 comments:

Last weekend, I met up with Rob, Matt, & Mike for a Catawba River run from the dam down to Mountain Island Lake.  This is the connection between Lake Norman and Mountain Island Lake, just north of Charlotte.  There usually isn't any current and its much like paddling on a lake.  Not this time.

Lake Norman is full again from all the rain so they had the dam opened up a little bit.  We had a serious river current moving under us.  Any more current and there might have been some whitewater paddling going on.  The time (2:25), distance (13.4 miles), and pace (less than 11min per mile) on the GPS watch pic below reflects both casual & medium pace paddling, some 80-100% intervals, and some paddling in reverse against the current (actual distance is 12 miles without the reverse paddling).  Top speed was 9.3mph down river at some points.  Just standing on our boards without paddling, we were going around 4mph+ at the narrowest points.  There were eddies and boils in the water that grabbed the boards' rails and tried to tip us over.  The current did let up once the river widened into Mountain Island Lake.

This was my second time doing this particular paddle.  The first time it took us 3 hours to cover 12 miles.  Here is my post on the last paddle.  Note the difference in the water texture in those pictures compared to these pictures below.

A new experience for us and much fun.  Check out this quick 40 sec video...


Those Dam Paddlers from WaterTurtle Media on Vimeo. 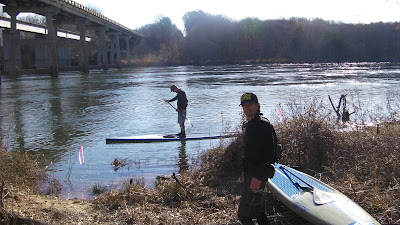 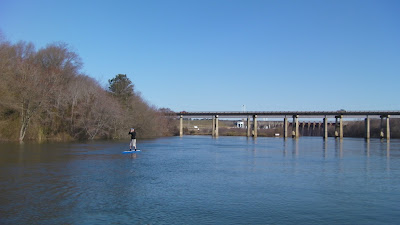 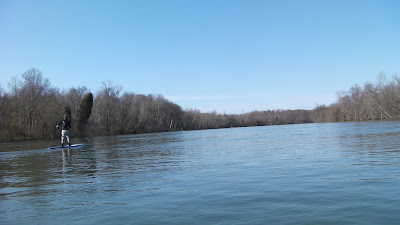 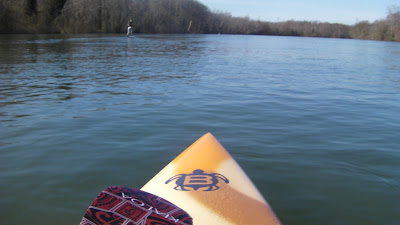 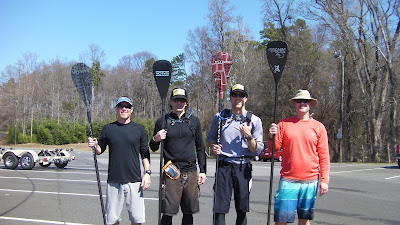 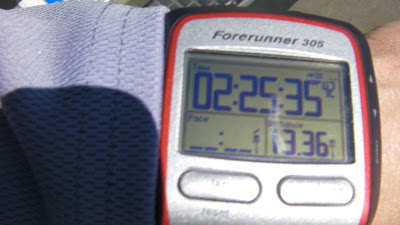 Posted by Waterturtle at 10:28 PM No comments: 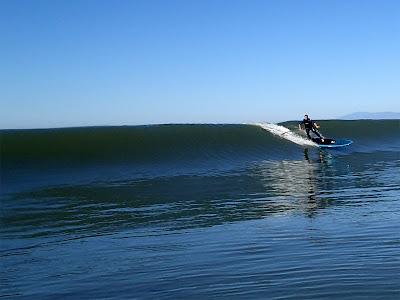 That's a beautiful long right hander.  Makes me want to get an airplane ticket to CA right now....or just play hooky to our local beaches when the next decent swell arrives.  Need a long glassy wave like that one.  Hard to concentrate on anything else after you see pics like this.

I paddle surfed at a nice right hand point break in small glassy waves near here a few years ago and loved it.  May have to go back soon.

More of these pics here.
Posted by Waterturtle at 8:16 PM No comments:

A Stand Up Guy

Stand Up Guy - The Documentary from Duncan Wilder on Vimeo.

This is a great film about a heck of a guy and a heck of a long distance adventure.  It's worth the 25 minute watch.  Shane Perrin used to be a very sick man and had a kidney transplant.  He has since transformed his health and his life...and now attempts very long distance stand up paddle expeditions and races.

You can follow Shane Perrin here on his blog.   He is now doing the Florida Everglades Challenge and is attempting to paddle 400 miles in 10 days....unsupported!  You can support Shane here and watch his paddle progress here.  The funds cover his operating expenses for this expedition and any funds above that goes towards the purchase of new SUP boards for kids and adults on dialysis or having just received an organ or tissue donation.  I can't wait to see the documentary film that he's making during this adventure.
Posted by Waterturtle at 8:24 PM No comments: