Picture in the Paper

Check out local Lumina News article about the Mullet Run race with a picture of Waterturtle.

Go here if that link didn't have the pictures working....scroll to page 6.

The picture was taken as I was catching a wave into the finish. Notice how far back I'm on the board since I'm surfing straight in to the beach instead of surfing down the line.
Posted by Waterturtle at 9:58 PM No comments:

That is the tagline on the cool Tshirt we got for competing in the 1st Annual Mullet Run. It was a "Battle of the Paddle" style stand up paddle race in Wrightsville Beach on Saturday, July 24th. The race was a benefit to raise money for both Surfers Healing and the Karen Beasley Sea Turtle Rescue Foundation. 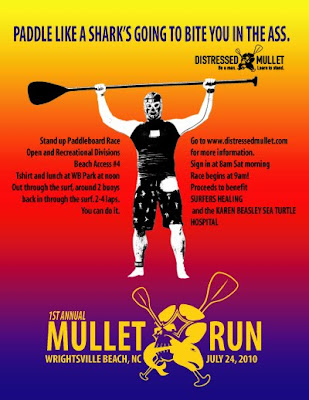 "Battle of the Paddle" means it was a beach start, out through the waves, around buoys in the ocean, back in through the waves, ditch your board on the beach, run around a mark on the beach, grab your board, and do it again (more laps). It was a very challenging race and I was just glad I entered the Surf division (non-race boards, 2 laps), and not the Open division (any board, 4 laps). I think I would have thrown up if I had done 4 laps. Conditions were challenging but not extreme - waist to stomach high waves (some higher) with a little side-sideoff southwest wind that was between 5-15 mph. Local Lake Norman paddlers Mike, Matt, and his 15 yr old son Nick, joined me at the race. Props to Matt for doing the Open division race and to Nick for being one of the two youngest kids out there (and a lake kid to boot!). 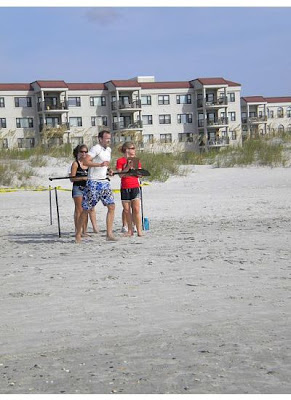 Right after the finish - I'm spent and hurting at this moment, pretty huh? (photo taken by Mike's wife Rachel with Matt's camera)


This was very different than the usual flat water races we've been doing. This kind of racing allows for more options to catch up to those in front of you even if you've made a mistake. The biggest thing to remember in this type race is to be patient and never give up. I fell on each lap outside the first bouy in the same exact spot both times, caused by some weird phantom chop. Both times I was passed, particularly on the 2nd lap by 3-4 people. You never know what will happen because then those 3-4 racers all fell in the waves at the end of the last lap into the beach, and I caught a beauty - a waist high nugget that I rode all the way into the beach, passing them all. I ran to the finish ahead of them, knowing I was somewhere in the top five...thought it was third but I wasn't 100% certain. I ended up with a fourth (21 racers in surf division), just missing the podium - not bad for a lake guy. I can't help wonder how those falls cost me a top three finish. No matter - it was a very fun and challenging race and everyone there truly had the aloha spirit.

Then they held the relay race - 3 person teams - Mike, Nick, and I formed the "Catawba Mud Stompers", the lake team. What a fun race...we came in 6th place out of 8 teams. As the anchor, I caught and rode another wave in (stepping completely back to the rear of the board to prevent pearling since I was surfing straight in) on my lap to secure 6th...good times indeed. John put on a great race event, put a ton of work into it, got some great sponsors, and it raised a lot of money for some good causes. He's talking about including a SUP surf contest next year. The lake guys will have to return and represent the flat water people...yeeha!

More on the results and pics here and here, and here from the Mullet Man himself. 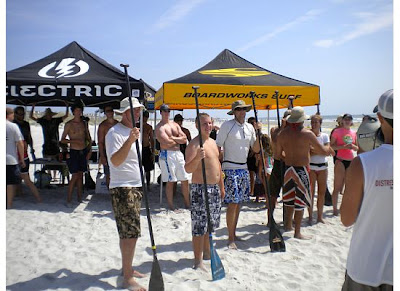 From left to right - Mike, Nick, and myself - Catawba Mud Stompers prepare for relay battle (photo by Matt) 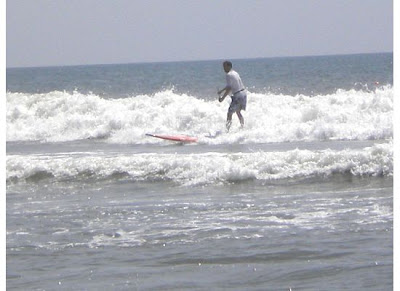 
A final note on the board I used. I possess one of the original Sean Ordonez Shape (SOS) Big Blue boards. I love this board...bought it used in summer 2008 from a local SUP'er/surfer in Hilton Head, and its been my wave board. It is a wave catching machine, very stable, handles great in upwind paddling, and cuts right through chop and whitewater. Its dimensions are 10'10" length, 28 1/2" wide, and is a classic shape. It also has a mast track and I've had some great light wind wavesailing sessions on it. Unfortunately, Sean Ordonez got out of the SUP board shaping business a while back after he got cheated out of his original shapes from someone who basically stole his shapes and sold them as his own production boards. Apparently Sean wasn't able to do anything about this character, became frustrated, and decided to stop shaping SUP boards. He is apparently still shaping surf, kite, and windsurf custom boards. I only hope he returns to SUP...I can only guess he might still be doing SUP customs for special orders. I went to his web site and see that there is a new look under construction...hopefully this means a return to SUP boards too. Here is the old web site for his SUP shapes...click on "Big Blue" to see my board.
Posted by Waterturtle at 7:29 PM 1 comment:

Two good articles that reflect the SUP explosion and impact on the surf industry: 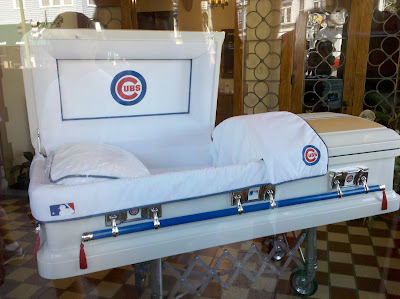 Returned to the friendly confines of Wrigley Field. Chicago still rocks, the Cubs fans still rock, Left Field Bleacher Bums rock and Right Field sucks, and the Cubs...well...the Cubs are being the Cubs right now. There's always next year. It was hot as blazes. Had the best intentions of getting in some SUP time on Lake Michigan (was going to rent a SUP board/paddle from Kayak Chicago at Montrose Beach) but didn't make it out there. 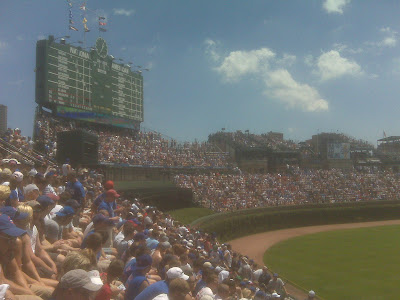 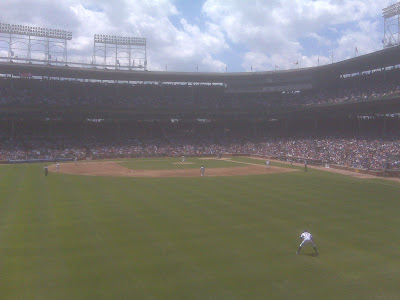 Here's to the Cubs...there is always hope.
Posted by Waterturtle at 8:19 PM No comments: 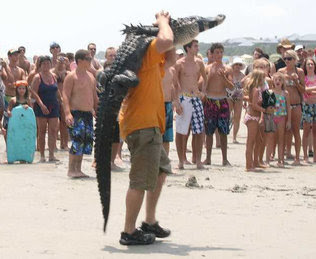 Hatteras Island still rules as far as windsurfing because of it's various launches, various conditions, spots to sail, its shops, and the fact that many other windsurfers from around the world travel there. You'll be hard pressed to see any cars and trucks with gear on top at the Crystal Coast like you do when visiting Hatteras Island. There used to be a couple of windsurfing shops in Emerald Isle and Salter Path, but they're no longer around. However, most local North Carolina windsurfers and some out-of-state windsurfers know of the hidden windsurfing gem of the Crystal Coast and what it has to offer. Depending on the wind direction and tide schedules, you can find waves, swell, chop, and flat water. It's said the waves off the Core Banks in a NE may be the biggest on the east coast due to the long fetch from Diamond Shoals. But only a few have windsurfed there since you can only get there by water and it's logistically difficult. When I lived in Greensboro, the Triad Windsurfing Club used to take annual windsurfing trips to Emerald Isle.

Here is an excellent listing and summary of the best spots on the Crystal Coast (scroll down to "Morehead City" and "Emerald Isle" sections)...but there are many other places to launch.

Last week, I ended up windsurfing in Bogue Sound (after having tried by failed to get to Harkers Island). I also windsurfed in the ocean on another day in crystal clear blue water that looked like the Caribbean. I also stand up paddled in the ocean and sound. There wasn't much of a swell last week so I only caught some small knee high wave rides on the SUP. I also took my daughter, her cousin, and my brother-in-law on a kayaking adventure to Bear Island and shelled for sand dollars and conk shells. There are miles and miles of remote barrier islands and back water areas to explore on SUP or kayak. The area is so diverse and the water recreational possibilities are endless.

Here is a short 2 minute video of windsurfing in Bogue Sound.