I got the foil bug and have started windsurf foiling.   I began researching it last spring.  One of the things I was looking for was a foil that could go with one of my existing boards so I wouldn't have to invest in yet another board (at least not yet) just for foiling.   I discovered that LP Foils made one specifically for windsurfing for Tuttle and Deep Tuttle fin boxes (I already have two boards with Tuttle fin boxes)....and...they are based right here in the good ole USA, across the Columbia River from the town of Hood River in the town of Bingen, WA.   So back in July while visiting Hood River, Rob and I stopped by the LP Foils shop.  We met Peter, he showed us around the shop, we talked foils, he showed us his product, and answered all our questions. 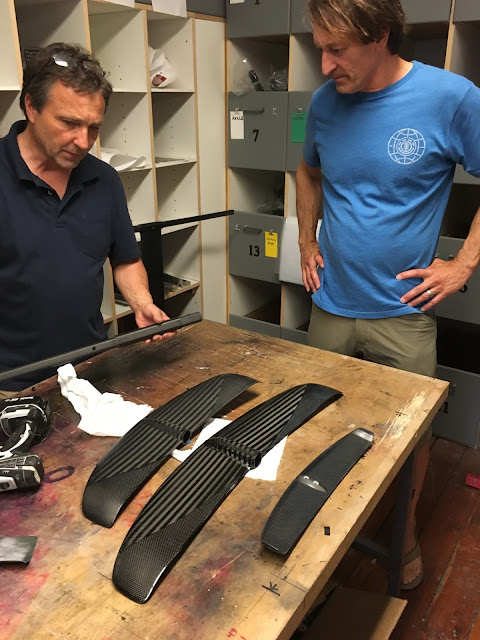 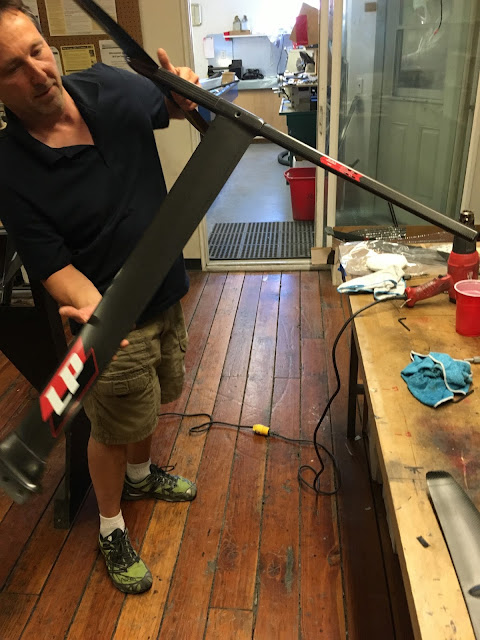 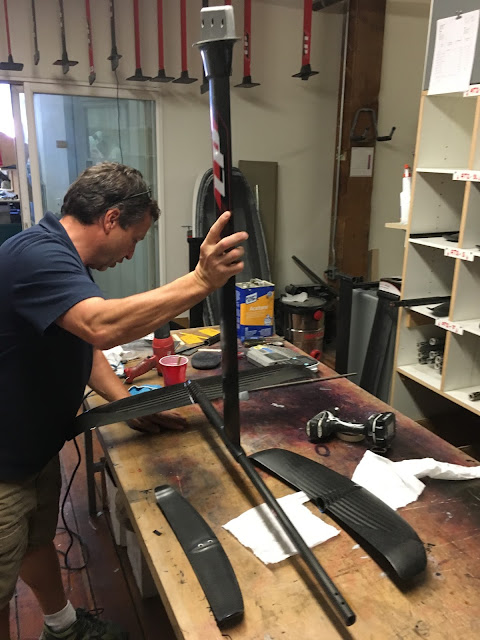 I already have two boards that have regular Tuttle fin boxes.  One is the AHD Free Diamond 77 (145lt).   I've had this board for over 15 years and it still rocks as a great light wind board.  My other Tuttle fin box board is the Starboard Kode 112 lt board.  I placed an order soon after our visit and received my foil fairly quickly.  I got the 35" mast based on Peter's recommendation (and another windsurf foiler I talked to). 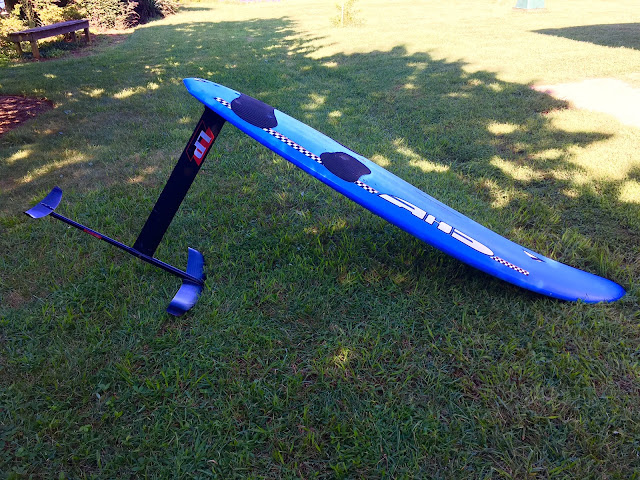 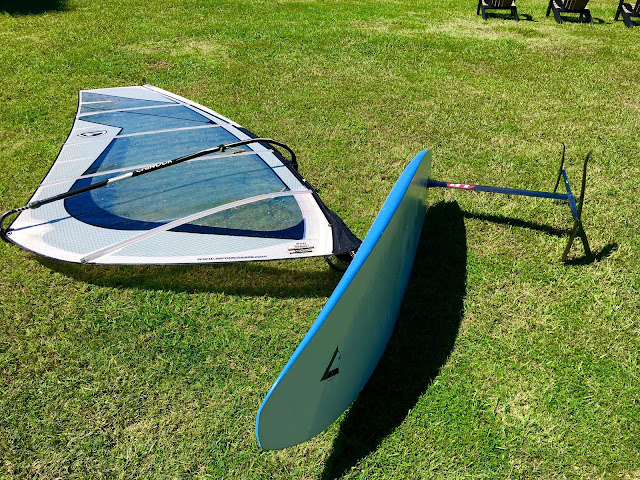 So I took the foil out for its maiden voyage in early September.  It was a North wind and it was either 5 or 15mph....pretty challenging conditions for Lake Norman.  I put the foil on my AHD 77 (145lt) and rigged a 6.5 sail (camless freestyle/freeride oriented sail that has a lot of power).  I took the foot straps off so I could have room to move my feet around (this was really helpful as I did do a lot of foot movement).  I was careful to launch in deep water and making sure I didn't get too close to any shallow points on the lake.  And tried to remember to fall away from the board so the foil wouldn't hit me.

As mentioned before, I had read a bunch about it and discussed foiling with others who had done it already, so I sort of knew what to expect.  Everything I was told, it happened.  When the board came out of the water, the windward rail would dip....or the nose would take a dive....or the foil would completely fly out of the water, etc.  After 4 crashes, I finally started to get the hang of it and focused on the balance point and board/sail control.  Finding the right balance point along with board & sail control seems to be more nuanced vs regular windsurfing.  It took a ton of focus.  After that, I had 4 really good long reaches flying the foil.   It required a gust of approx 12 mph to start flying the foil but it stayed up through the lulls. 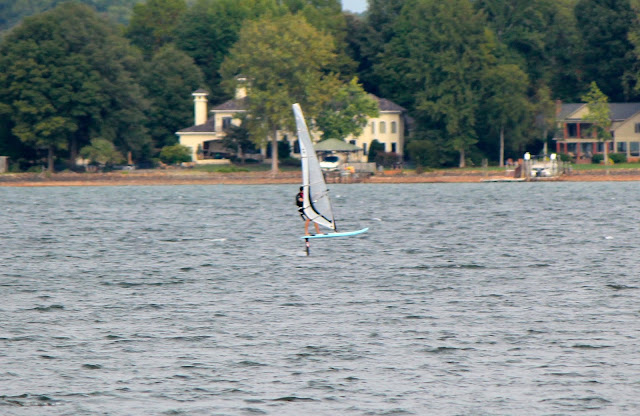 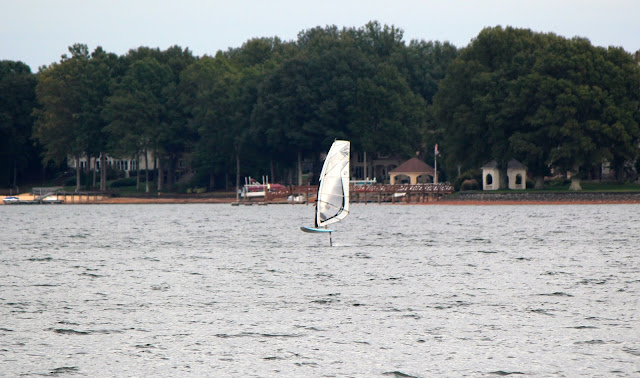 Once I got the hang of it, it was awesome.  I'm totally hooked.  When the board comes out of the water, everything gets real quiet and you're literally flying over the surface of the water...just like a pelican (which those who know me - know thats what I want to be in my next life).  It is an exhilarating feeling when the board comes off the water.   I found that I was holding my breath without even realizing it, so I have to remember to breathe.   It is a great workout. 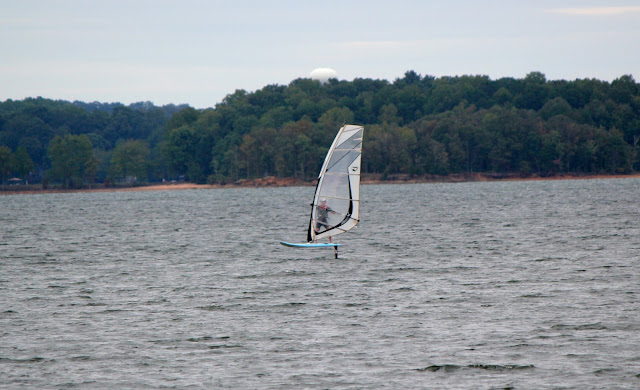 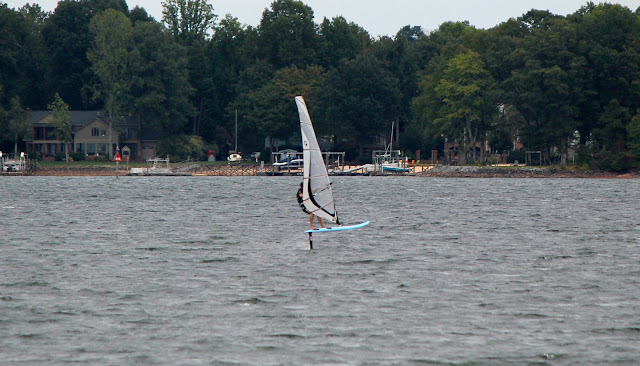 I've foiled several more times already since we get a lot of light wind after September.  Conditions were mostly in 5-15mph wind range with some higher gusts.  I still haven't put the foot straps back on...and not sure when & if I ever will.  The stance for windsurf foiling is more upright and doesn't require long harness lines.  The upright stance more resembles light wind wavesailing and being out of the harness a lot.

Now I need to work on my foil jibing.  That is very hard to do without crashing.  So more learning curve for me but thats what makes it so much fun as well.

Here is a great video of Hood River's Dale Cook windsurf foiling...and jibing.  I've noticed in this video that he keeps the sail upright while jibing and keeps the sail over the board's balance point as he flips the sail:

Dwight & Jacky of SUP Surf Machines started windsurf foiling earlier this year and provided some great advice, including starting out without the foot straps.  Check out their blog for pics, videos, & posts (and Dwight is shaping foil boards too).

Andy at Wind-NC is selling a few different windsurf foils, now including the LP Foil.


Short video clip of me foiling on Lake Norman...


Windsurf Foiling on Lake Norman from WaterTurtle Media on Vimeo.
Posted by Waterturtle at 11:22 AM 4 comments: