Great video of the wildlife in the Galapagos Islands...7 minutes of amazement, wonder, and colors...let this video buffer all the way and watch it in full screen mode to the very end. You'll want to watch it again and again.

Galapagos 2010 from Darek Sepiolo on Vimeo.


I captured a surprise myself. I've been collecting some footage for a SUP short film I'm working on. One morning a couple of weeks ago, I set up my camera on a tripod to capture time lapse video of the sunrise over the lake. I left the camera running and went off for a paddle. I returned about 45 minutes later, shut the camera off and took it away. I reviewed the footage a couple of days later and to my surprise found there were a couple of "visitors" that made an appearance. Check it out...

The Dolphin Are Angels 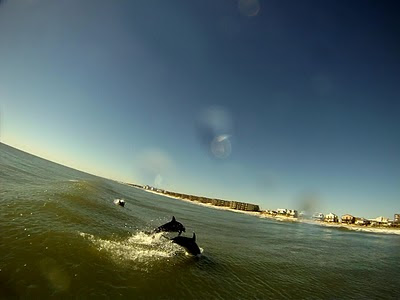 
Waves were had last weekend. And angels were among us.

Got a rare open weekend to take a day trip to the coast and the wave forecast thankfully worked in our favor for some SUP surfing. After watching the forecast change around several times in the days before the weekend as it typically does, Rob and I finally decided to venture to the Cape Fear coastal area. We drove in Saturday night, arrived in Wilmington for a late dinner and some brews, courtesy of Front Street Brewery...very good and would recommend it. They had a real good locally brewed IPA, Pilsner, and Lager. Got up early Sunday morning to hit the waves.

The conditions varied all day from waist to head high with different types of peaks. It was a beautiful sunny day that started out chilly, but warmed up to mid 60s. We only needed a 3/2 wetsuit...water wasn't too cold yet. Wrightsville Beach in the morning had nice lefts. We met our friend Jeff there for a couple of hours while he proned surfed and we SUP surfed. Lots of prone surfers were out but everyone had enough room to spread out and find their own peaks. We then moved down to north end Carolina Beach thinking we would see the local crew there but missed them. They had been there that morning in some hefty barrels. So Rob and I went to the inlet to surf but it was a bit bumpy and messy there with the wind and tide. After a few waves there, we then moved back down towards the pier with the prone surfers & 1 SUP’er we didn’t know.

Then the wind lightened up, it started to clean up and the waves got bigger! Got some nice rights despite staying out of the prone surfers’ way. I was challenged to get positioned right in order to finish out the wave and not get creamed by the close-out. I was mildly successful...got worked pretty good and have the scars to prove it (fin to the shoulder...nice bruise...glad it wasn’t my face).

However, something else magical happened. It started at the inlet when some dolphin appeared. They were jumping clear out of the water right in front of Rob, just like a SeaWorld show. After we moved closer to the pier, they appeared again. They sort of caught me off guard and surprised me. An immediate feeling came over me that these guys were "angels". It was just one of those very strong feelings that overcome you...hard to explain...but I got some serious goosebumps. They were looking out for us. I turned to paddle into a wave, they followed and surfed the wave with me. They surrounded me on all sides and I could see them to my side and even in front of me on the inside in the whitewater. Escorted by angels.

Ralph and his friend Sam had the same experience at Topsail Island. Sam caught some amazing images of the experience. Awesome stuff...experiences we'll never forget.

Sure...you could say they were just being dolphin....doing as dolphin do. They were curious about us, checking us out, being playful alongside us...and showing off to highlight they are the better surfers. It doesn't matter what faith, religion, or lack thereof you might adhere to...you can't deny the presence of something bigger than we are when stuff like this happens. I never get tired of seeing dolphin (or sunsets)...and I'll always think of them as my angels. Grateful.

I did try the GoPro that morning but didn't catch anything good before the batteries died (forgot to put in the lithium batteries...DOH!)...although here's two images I captured before it went kaput. 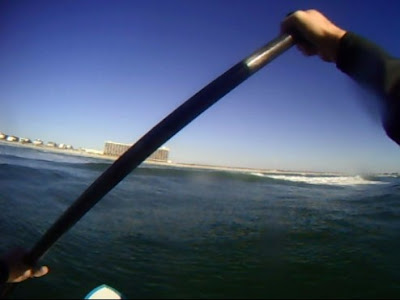 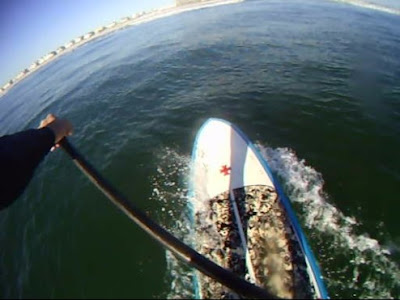 Here's a quick vid...I pulled out the other camera in time to catch Rob catch one of the messy waves at the inlet (check out his switch stance on the inside). I know you don't believe me but we had many better and bigger waves than this throughout the day...I just didn't focus on the camera because I was more focused on the surfing. Anyway, after Rob's wave, just sit back for a moment and relax while the ocean lulls you into a dreamy state of mind.

Posted by Waterturtle at 1:48 PM 2 comments:

Cardio workout on the trails today with Rob set to the remake of "Under My Thumb" from one of my favorites, Social Distortion.

Posted by Waterturtle at 8:58 PM 2 comments: