It Was A Stand Up Weekend...

...and a great waterman's weekend as well. Everything from Stand Up Paddle (SUP) racing, to SUP in the waves, to light wind SUP wavesailing, to flat water windsurf speed blasting. 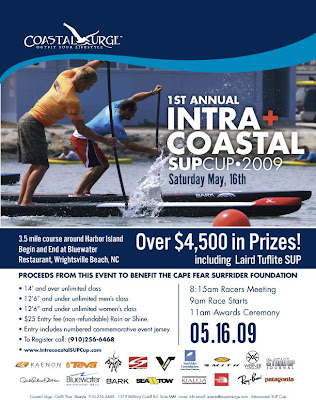 This took place Saturday morning. 35 racers entered the event and it was a 3.5 mile race in flat water. It was a "sailing" start...ie. a 3 minute warning was given to the start and you could paddle all the way up to the starting line with momentum as they sounded the horn. I misread the start line and had a terrible start ending up in the back of everyone. I felt like such a slug with my 10'6" surf oriented board but after the first 1 mile leg, the course took a turn into the 10-15mph wind. My board suddenly had an advantage, I had a sudden burst of energy, and I took off passing 7 people on that 1 mile+ upwind leg. I passed a couple more folks after that and finished 23rd overall out of 35 people (21st in the 12.5ft & under Unlimited Class) with a time of 55 minutes. It was a great experience....fun and I certainly learned a lot after not really knowing what to expect. I learned that I need to have a much better start and I need to maintain focus on my stroke technique, which also needs improving. I look forward to doing it again and going to more races. Coastal Urge did a great job hosting the race and gave away a ton of cool stuff (I won a very cool North Face water resistant pack bag for my efforts) thanks to the many sponsors. 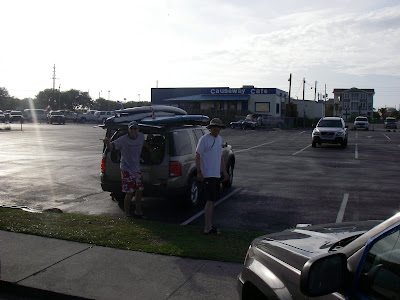 7:45am bright and early arriving at the race (photo by Mark)


Here is another blog post about the race and results.

After the race, we had the rest of the weekend to play in the water. We certainly took advantage of it. Early Saturday afternoon after the race, we decided to do some light wind wavesailing with 5.4 sails on our SUP boards. The wind was side-shore about 10mph. We opted not to go to the better wave spot at North End Carolina Beach because it looked very crowded with lots of cars and fishermen on the beach. So we stayed closer and upwind of the pier. The only problem was we underestimated the bad shorebreak and the sketchy launch that had large rocks blocking good beach access at high tide. I had a heck of a time getting out through the shorebreak. Once out, I caught one decent wave back in and got caught in the shorebreak again. It ripped the webbing that held one of my battens in place making my sail almost useless. So I gave it up and Rob came in too after having similar difficulty in the shorebreak. Oh well...live and learn.

After chilling out for a couple of hours back at our room, we trekked back out around 5pm to the North End Carolina Beach for some SUP surfing since the crowd there had thinned out. The wind had backed down a bit making it easier to paddle in the waves. We surfed for a couple of hours and caught some good wave rides (but still fell a lot too). We're still learning but certainly progressed since the last time out in the waves back in January. 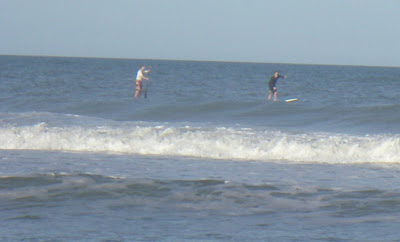 Me & Rob paddling into position (photo by Mark) 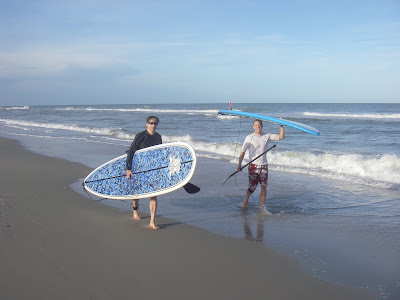 Can you see our smiles? (photo by Mark)


After a good nights sleep, we were back at North End Carolina Beach at 8am the next morning for more SUP surfing. This time, the local SUP crew showed up and we all hit the water. The local crew consisted of Brian M, Dwight & Jacky, Brian A, Brad (C4 rep), and others. We had a light southwest wind making for side-off conditions. It was a lot of fun being on the water with 6 other paddle surfers. Big thanks again to them for sharing their spot with us. I think we progressed that much more that morning as we caught some good wave rides once again. It was certainly our best SUP wave session so far.

Here are some pics from that morning (the lighting was bad for picture taking), plus here is another blog post with some video that shows the conditions we had. 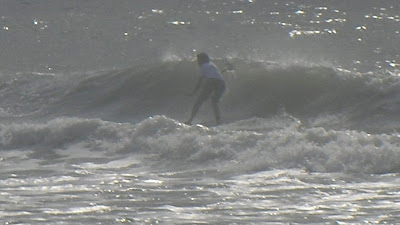 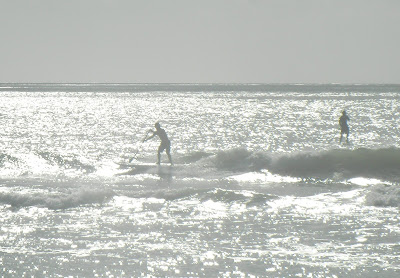 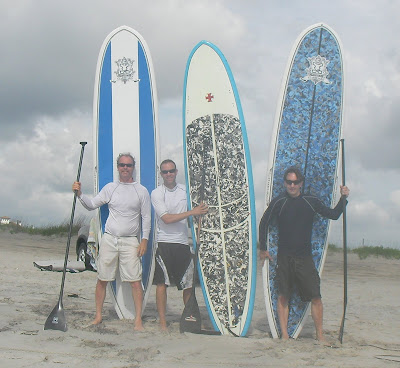 The Three Amigos - Mark, myself, and Rob (photo by Brian M)

The wind started to pick up which could only mean one thing - windsurfing. We were a bit worn out from all the SUP surfing so we decided to go flat water blasting at the south end of Carolina Beach (Fort Fisher) at The Basin to wrap up the weekend. This has to be one of the best and most easily accessible flat water sailing spots in the country. Way back in the "old days" of windsurfing, Ken Winner's Speed Series was held here and this spot also produced NC speed records at the time. The southwest wind started out around 15mph and then kicked up to around 20mph. We sailed for 2 solid hours, flat water speed blasting, and practicing our duck gybes. I nailed 3 of them but they weren't pretty (and I fell on many more than that)....I still need to work on my form. Rob is nailing his duck gybes...I saw him hit 4 in a row.

I surprised myself by the amount of energy I had all weekend and hitting the water for five different sessions over 2 days. However, I can tell I'm a landlubber because I'm very sore right now and my body is beat up...the downside of being a weekend warrior 4 hours away from the nearest waves. 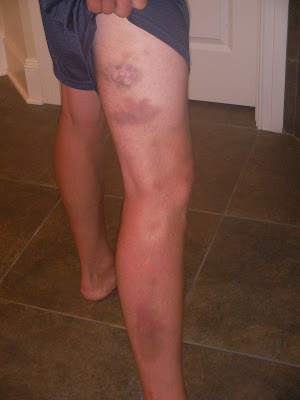 They say that when you fall off the SUP board, you're supposed to fall AWAY from the board. I didn't do that very well.

I love the Outer Banks for all it has to offer but I was pleasantly reminded how diverse the conditions and spots are in the Carolina Beach area for all the great watersports (windsurfing, surfing, SUP for flat water and surfing, and kiting).
Posted by Waterturtle at 7:00 PM

Sounds like a great weekend- and you've got the battle wounds to prove it! How are the hands??

The family and I are coming down this weekend. We'll stop by & say hi.

You guys should be tired from all the time you spent on the water this past weekend! Racing, SUP'ing, wavesailing....

It was great meeting you, Rob, & Mark! Good to put a face with the names! I was stoked from the SUP session on Sunday morning. That is the only thing that keep me from feeling too bad about missing the windsurfing session at the North End on Monday! I was still bummed, but the SUP helped ease the pain. :)

Mac, that was a great wave you caught on Sunday, it looked like you rode it half way down to the inlet! Nice long ride!!! Stoked!

YES! An Actual Witness! Ha Ha....
Thanks Brian...you're too kind. You didn't mention all the other times I fell in.

That was a long ride but not that long :-) I was very stoked though! That was definitely my best day out SUPing in the waves and looking forward to more.

Hey Mac, you guys are really getting dialed in! You and Rob caught some great rides. I'll vouch for that!
Can't wait to catch my first real wave!
Re: the bruises- if that's your story- well then, I'll vouch.