The NC Lake Crew represents at the Cold Stroke Classic 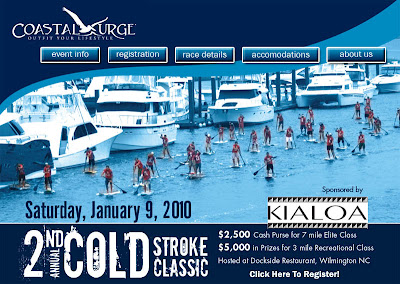 A bunch of the NC Lake Crew raced in the Cold Stroke SUP Classic in Wrightsville Beach, NC on Sat Jan 9th. There were 6 of us from Lake Norman (Mooresville/Denver area), 1 from Jamestown Lake (High Point), and 1 from Belews Lake (Greensboro). And to cap it off, we took 4 of the top 10 spots in the Recreational 12'6" & Under Division (out of 36 racers). What an awesome race. Congrats to Fred, who after falling in at the crowded start line (Brrrr), smoked us all to lead the NC Lake Crew with a 5th place finish. 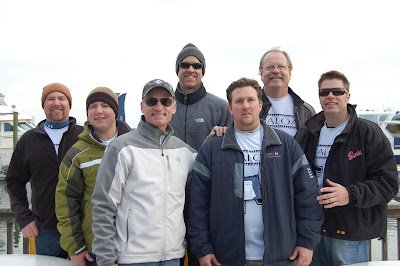 Coastal Urge put on a great event. They were very smart in scheduling the race just before the Orlando Surf Expo so that all the pros would attend. There was Team Hobie - Chuck Patterson, Byron Kurt, Colin McPhillips, Tommy Lloy. There was Team Starboard - EJ Johnson, Dan Gavere, and Brandi Basawitz. Jimmy Lewis, Naish, Tahoe SUP, YOLO, and Kialoa team riders were also there. Coastal Urge also thought of many other details - from the music, the food, the expo/demos, the Polynesian Fire Dancer for the opening ceremony, all the way to the winners podium. Go ahead and mark your calenders for their next race on May 15th.

Saturday's race lived up to its name with temps in the low 30s and a 10-15mph NW wind putting a wind chill in the 20s. Byron Kurt from Hobie won the Elite Mens Division and is probably the fastest stand up paddler in the world right now (has won big SUP races in Australia, Netherlands, U.S, etc). EJ Johnson from Starboard came in 2nd place. Both are from California. 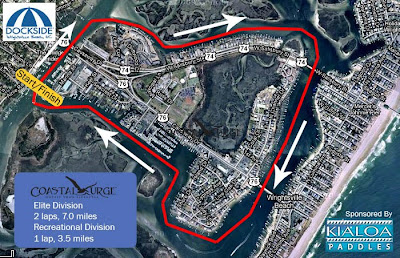 Race start - that's me in the foreground to the left with the yellow/gray sleeves and black cap. That's Nick and Matt 5th & 7th from the right, respectively. I lifted this photo off of Distressed Mullet's excellent SUP blog - I think his wife may have taken this photo. Thanks John! It was very nice to meet you in person after the race.

The day before, pro Chuck Patterson gave a race clinic, which I attended. Chuck was very nice and excited to be there even though he was missing out on some big swell hitting California (he caught a flight right after the race back to CA to catch it). In the clinic, he worked with everyone individually on stance, stroke technique, race strategy, and answering any questions we had. At the Friday evening dinner, he gave a video presentation that made you want to go out and hit the water. He's been focusing so much time in the big waves recently, that he entered the Recreational Division and just paddled around back & forth, talking to racers giving tips and just having fun. Chuck represented the aloha spirit well. I also met and talked to Kialoa and Naish team rider, Karen Wrenn and her husband John...along with Dave and Meg Chun, owners of Kialoa Paddles...all very nice people. 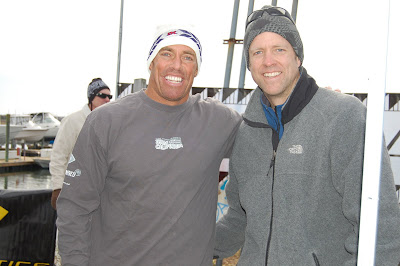 Chuck Patterson and I (photo by Tom May...thanks Tom!)

After the clinic, I demo'd a couple of SUP race boards - the Naish Glide and the Jimmy Lewis Slice. Both were big departures from my "all around" SOS Big Blue 10'10" and really cut through the water much more effortlessly. I wanted to demo more but was too tired after the race. If I intend to keep racing, I may have to get a race board built for the lake and inland flat waters. And another specifically for SUP surfing. Sigh...more equipment.

The biggest thing I noticed at this event was something that has been a constant and consistent theme with stand up paddling - everyone was smiling. It was very cold...and everyone was smiling. The SUP community is a very vibrant, healthy, and positive community...not only in North Carolina, but also everywhere else. This was evident in all the ocean and lake people I met at the race all the way from Hawaii, California, Virginia, South Carolina, Michigan, Florida, New Jersey, and other states that showed up.

Local newspaper article about the race here and here.

I want to set up a river paddle this summer with Dan Gavere. He seems really into the idea. I thought of your crew. I'll keep you posted. Let me know when any of you are in town again and I'll hook you up with a good surf spot, paddle. Also, I'll list you on my blogroll list. Nice work.

The first part got cut off: I had a great time meeting your lake crew. Nice job in the race. You must be training hard. Good showing.

Hello I want to congratulate to them by its site of the Web of the excellent looks like entertained and very good very to me it elaborated. I invite them to that they explore a little on my Web site.