In every sport, there are a lot of things to remember in terms of preparation and technique. It's no different with Stand Up Paddle racing. Let's cover just the basics without too much detail...

Eat right - stayed away from sweets (I miss you ice cream...please come back to me), cut down on the beers, and start carb'ing up starting a few days before the race. I also did other things like vitamin and protein supplements.

Cross train (mostly biking/mtn biking) to work different muscles and the heart/lungs for any type race much less racing in higher altitude (6200 ft at Lake Tahoe).

Stroke technique - there is minutia in each of these...just like a windsurfing jibe:
- Reach
- Catch
- Stroke
- Release
- Return to Reach, and do it again...

Stance - where are my feet on the board when paddling upwind and downwind.

GPS watch - measure pace, distance, time, etc. Tells you which strokes are faster and when.

Hydration - when I was warming up the day before the Tahoe race, I got cottonmouth because the air was so dry. I hydrated all week long before the race preparing for the drier air and higher altitude. I trained with a Camelback on my back the last several weeks in the hot/humid North Carolina heat, then used it in the Tahoe race....filled with electrolyte powder mixed in the water. 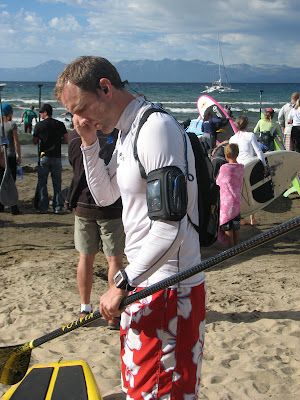 
Oh yeah - you obviously gotta put in the miles, paddling, and working on getting faster. I was doing 5 and 6am paddle sessions in the morning before work when it was still dark. I went out on the weekends, Sunday nights after family time to put in some longer distances. It's tough to get it in when you're a regular real world father and husband with an avg 60 hr work week.

Mental preparation - psyching yourself up...after you do all of the above, then it's 80% mental after that. 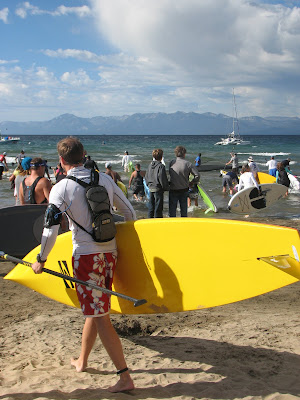 Going out for battle


Take all that prep - without it, I would have been in big big trouble at the Tahoe race. But it still didn't prepare me for "mother ocean" and what she threw at us. Most of all that prep work mentioned above, such as the stroke technique, sort of goes out the window when all you’re trying to do is just not fall, keep forward momentum, and survive. 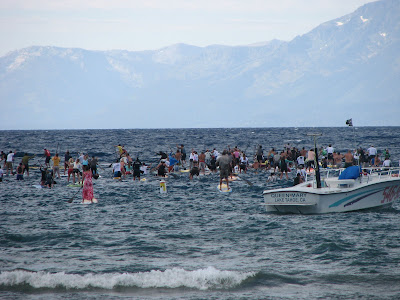 
But Mac, you were in Lake Tahoe. No I wasn't. I was in Tahoe Ocean on a very windy day. We had major whitecapping and big 4' swell/chop.

You know that cover photo in last years’ Stand Up Paddle Magazine of the Tahoe paddler in Caribbean like clear blue glassy water? Huh huh...well...not on my race day it wasn't like that. It was windier than the day before when I did my warmup paddle. They shortened the 6 mile course because of the conditions. I don’t even know the distance it turned out to be, maybe it ended up being 4 miles.

I fell and I fell and I fell some more. The wicked big cross chop was where I kept falling. I fell and got separated from my board and went for a swim. I fell on the board and hit my ribs. I only fell 2 or 3 times at the Distressed Mullet ocean race, which was still good prep for this race because of the ocean swells. Even though, this one put that to shame. There were many people who did most of the race on their knees. I was on my knees only when I fell and got back on...and then I stood up after several strokes. If I didn't have a windsurfing background with experience in wind, chop, waves, etc....I would have had a much harder time.

Considering the insane conditions, I was satisfied with my result. I told myself before the race to leave it all out there and that's what I did. I finished 36th overall out of 177 total racers in the Open Race. 22nd out of 83 racers in the 12’6” mens stock class. I think back to what I could have done differently for a better result...and the answer is....just fall less. But what can you do when you train mostly on a flat water lake for what usually is a flat water race on another lake? 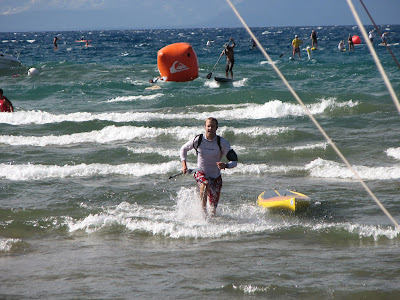 Coming Into The Finish


I talked to Chuck Patterson later in the day. He said it right. That was one of those races where you tell yourself you did the hardest one in the toughest of conditions.

They shortened the kids race to a quick out and back around a square course. My daughter, bless her heart, had a great start in the kids race and was doing well going out through the breakers into the wind (you read that right, little breaking waves on the beach), then she got nailed in the leg by an errant board which ended her race unfortunately. 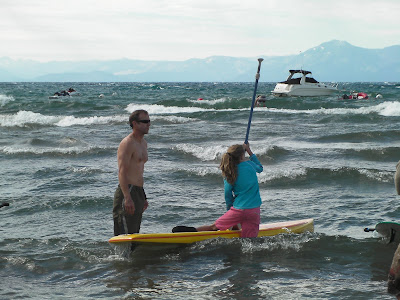 Her leg is ok, but she wasn’t too happy about not finishing. But like most kids 12 & under, she bounced back attitude wise...I’m very proud of her for even getting out there. I personally think the race organizers should have delayed the kids race until the next day when the wind lightened up but I know its tough to stay on race schedule and keep everyone happy. For my daughter, that's 2 races now that she has had to race in lots of wind. I wonder if she's done with racing because of that...maybe not. I've always tried to keep it fun for her but this didn't help. Who knew a "lake" race would turn into an "ocean" race for the kids? My goal now is to just keep her paddling with me on fun casual outings at the lake...and maybe the occasional small mushy wave SUP surfing at the beach. 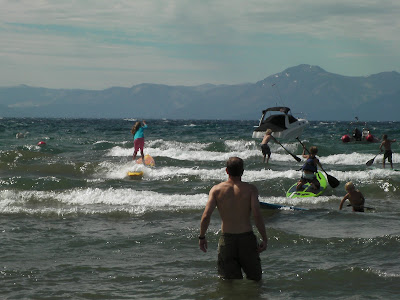 I'm not complaining...just merely making observations. Ernie at Tahoe SUP did an absolutely amazing job putting on this event. He didn't call up that weather. It's probably the biggest SUP race event in the country, behind the Battle of the Paddle races. The folks who put on events like this, big and small, should be recognized and commended. I can't imagine all the prep work, organization, questions from everyone, everyone telling you about their huge issue and how its more important than any other issue...the list goes on and on...and you can't make everyone happy. I know there were many more folks that helped, but Ernie is the man. I saw many smiling faces...everyone had the aloha spirit throughout the weekend. That's the biggest common trait I see in SUP'ers and windsurfers.

The WindSport Magazine editor said something about this in the last issue. I think about Jeoffrey/Coastal Urge, Bill/OBX Wave Jam, John/Mullet Run, Andy/HIHO, Sam/Pistol River Wave Bash, and so many others. Next time you see your local race organizer, give them a pat on the back and thank them (and don't complain about the conditions!).

I want to say a word about my race board. It's the 12'6" Surftech Bark Competitor. That board is fast, stable, cuts easily through upwind chop, and is a great downwinder and surfing board. Almost everyone fell in our race...didn't matter what board you were on...it was a skill and experience thing. If I had been on another board, particularly a board with a pin or rounded tail, I would have had a harder time. The Competitor's shape and squared off tail brings much more stability and it helped today. Big thanks again to the good folks at Surftech and Phil at Tahoe Paddle & Oar...if you're ever in Tahoe and want to SUP or kayak, go see Phil...great guy.

Danny Ching killed it in the Mens Elite race. Absolutely killed it. Rob Rojas 2nd, Chuck Patterson 3rd. Jenny Kalmbach, Brandi Baksic, and Karen Wrenn in that order in the Womens Elite. The wind came down slightly for their race and they had a 4 lap out and across some buoys and back Battle of the Paddle style race. 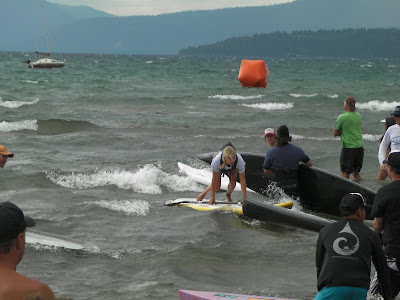 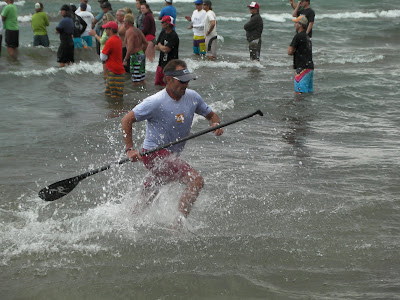 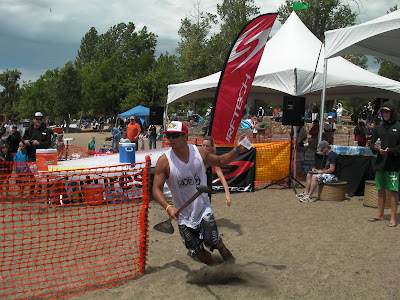 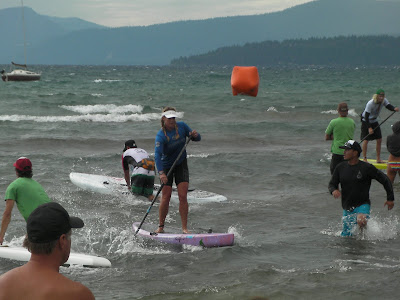 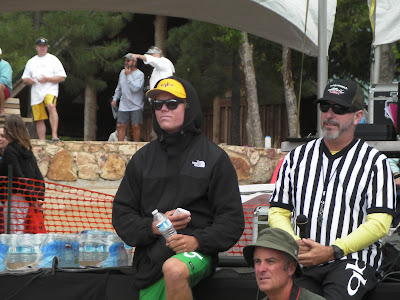 Slater Trout hanging out - he didn't race because of injury 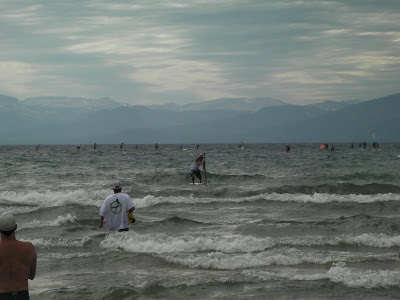 Danny Ching coming in - check out that stroke 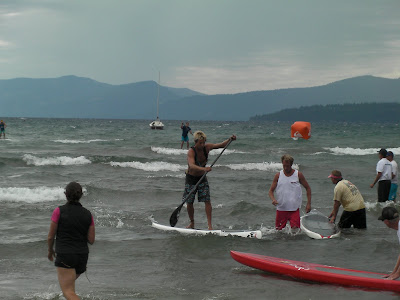 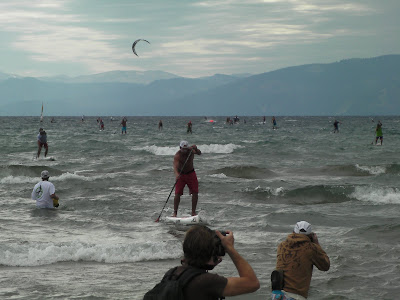 I got a chance to meet surf legend Mickey Munoz...very nice guy...asked where I was from and we talked about the conditions. Mickey is 72 years old and he finished 34th out of the 83 racers in the 12'6" Mens Open Stock Division...stick that in your pipe and smoke it. Let me say it again - 72 years old. 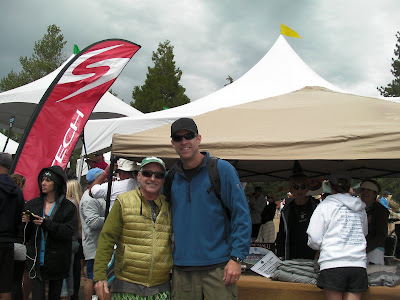 Hung out at the Kialoa tent with lots of great folks. I spoke with Chuck Patterson and his mom, Bitsy. Bitsy used to be a professional windsurfer. She has lived in Tahoe for the last 24 years. She said every day she walks outside and just says, "Aahhh". I can see why. Chuck and I talked about his great white shark experience and all the hubub that ensued. Hung out with Karen & John Wrenn and their kids. I also want to give a big shout out to Kim from Wilmington. She, myself, and my daughter were the only three people there competing from North Carolina. I had recognized Kim from the Coastal Urge races so it was great to see another familiar face from home. Dave Chun of Kialoa Paddles and I talked paddle stuff. Thanks John and Dave for the beers. The common thread among all these people was that they were all very friendly and there was much camaraderie.

Anyway, it’s un-Tahoe like right now for summer as I type this...cloudy skies and some sprinkles and lots of wind. Tomorrow it’s supposed to settle down and be a nice day. If I can’t get on a relay race team at last minute, we’re going exploring...this is a beautiful place. 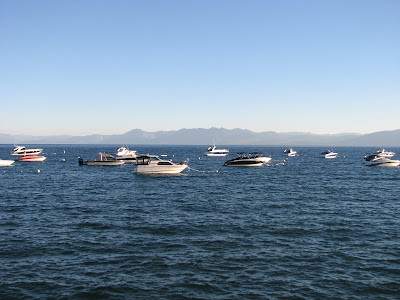 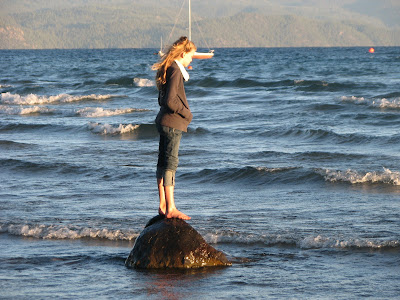 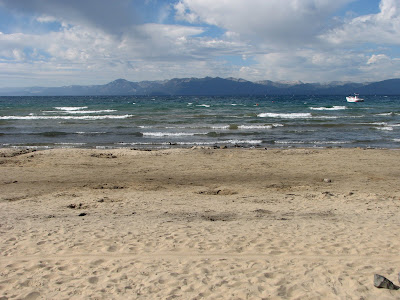 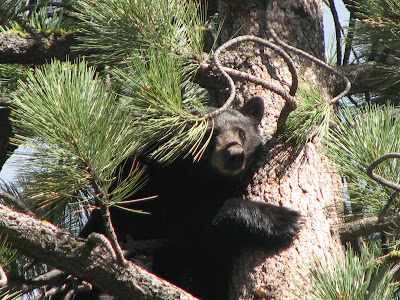 My wife and daughter took a brief trip down to Tahoe City for some shopping and perusing and came across this black bear hiding in the tree near some shops.

Hope everyone is doing well…..looking forward to some flat water racing at Lake Norman next weekend.
Posted by Waterturtle at 6:41 PM

Nice Mac! So are you taking early retirement or just walking away from your old job? What paddle do you use for races?

"flat" water sup races seem to do a great job drawing the wind. Your last 2 races have been on windy weekends. Maybe I can start following you around so I can get some good windsurfing!

I wonder if that guy on the North kite had the same idea. He heard there was a SUP race scheduled, so he knew it would be windy for kiting ;-)

Great job you guys! Those conditions look and sound brutal! If you fell that many times, glad I stayed away!!

Hope you had a great trip. Time to start planning vacation for next summer soon!