This is Part 1 of the Punta San Carlos pics and commentary...stay tuned for Part 2 which will have more water action shots, including some taken by the world famous and illustrious Clark Merritt.

Special thanks to the the crew and staff at Solo Sports. This was our second trip there and we had an amazing time. I highly recommend this trip if you ever get the chance. I also recommend the Matt Pritchard Wavesailing Camp. I was sailing the waves better at the end of the week and took away some things to continue working on. Matt and Kevin McGillivary were excellent hosts and instructors. 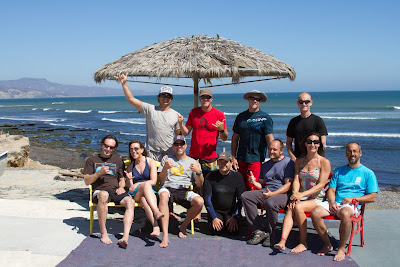 One of the great things about the week was the people and that we had a small group. From left to right starting at the top: Ruben Lemons (stayed for a 2nd week, competed and won 3rd in the amateur division of the Cactus Cup), Kevin McGillivary (also known as K-Smac, west coast pro and instructor in the wavesailing camp, absolutely rips Punta San Carlos), Matt Pritchard (World Champion, 'nuff said), Steve (Irishman landlocked in Switzerland, but very world traveled and lots of wavesailing experience around the world). Bottom row l to r: Rob (my partner in crime), Emily (Bay area windsurfer who frequents Crissy Field and absolutely loves PSC), Waterturtle, Chris (our rocket scientist from Melbourne FL and was always the last one off the water), Greg (Bay area sailor who frequents Coyote & 3rd Ave), Sam Bittner (AWT organizer and all around happy girl, she stayed for 2nd week and finished 2nd in the womens division at Cactus Cup), and Brock (Bay area sailor who also frequents Coyote and 3rd Ave). 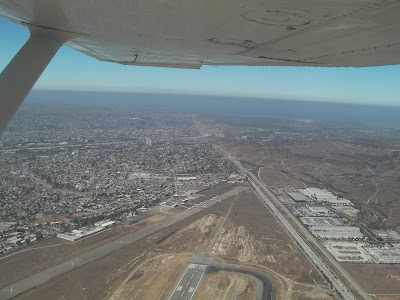 Crossing the border - Tijuana on the left, San Diego County on the right. 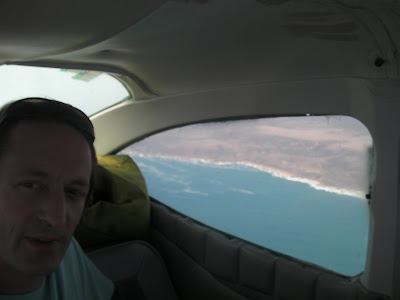 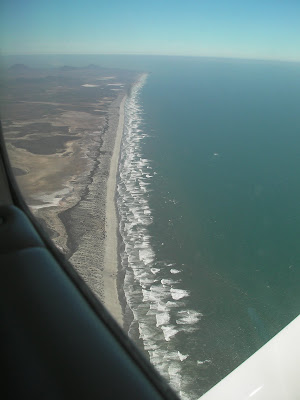 We were checking out all the cool breaks on the way down. 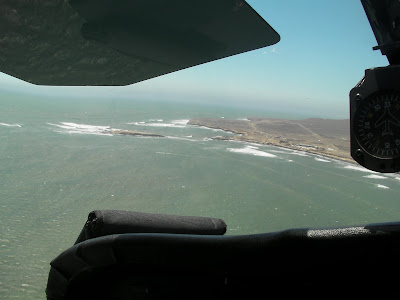 Entering PSC airspace! Our runway is that strip on the right. 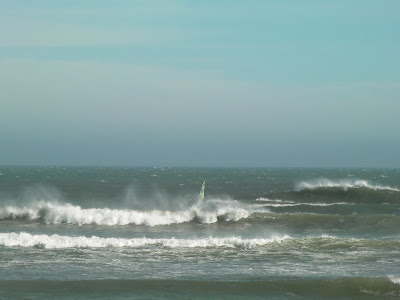 It was big when we got there - logo high sets 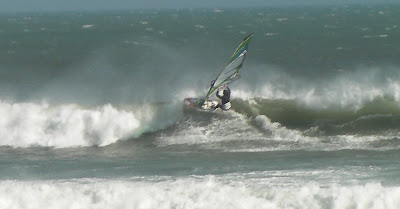 That's why they call him K-Smac 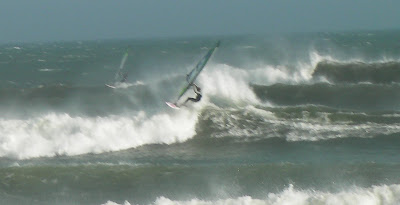 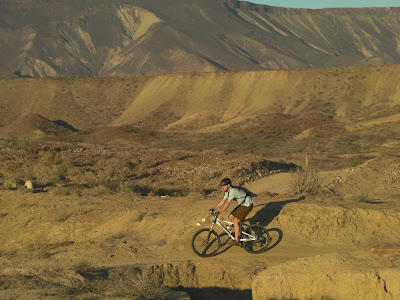 100+ miles of world class mountain bike trails for all levels 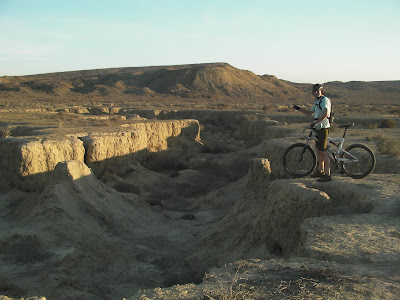 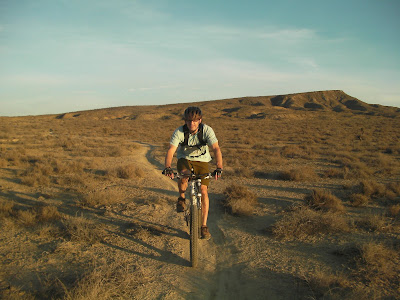 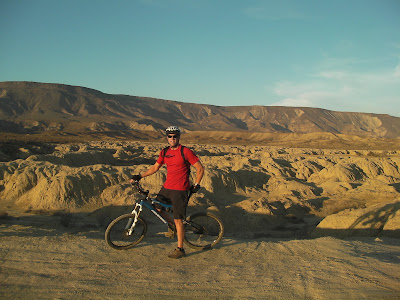 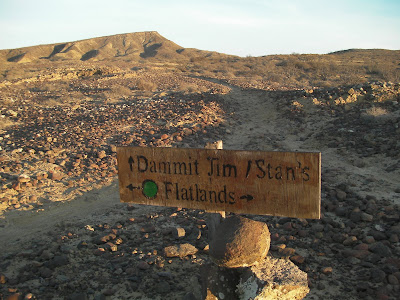 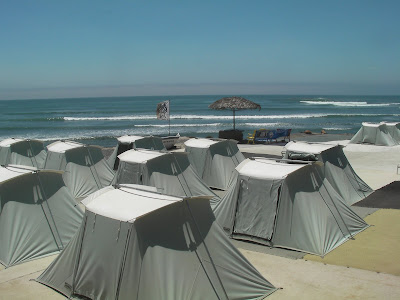 Our home away from home 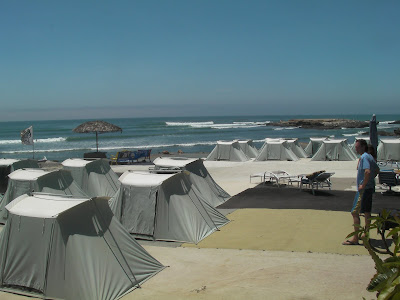 The tents were comfy with enough padding and sleeping bags provided 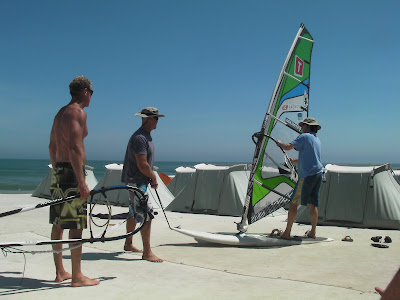 Kevin & Matt providing some on land instruction to Rob. We also had video analysis and remote audio helmet radios. We wore helmets on the water and Matt was relaying instructions to us over radio....how cool is that? Kind of weird having Matt in your head like that...but it helped. 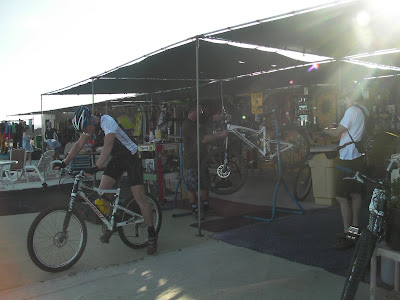 The crew suits up for some trail riding 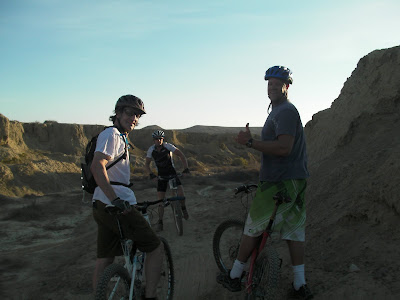 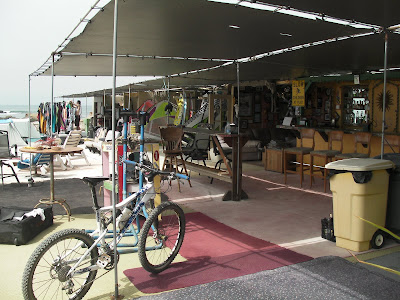 Solo Sports Camp - bar/lounge to the right, equipment in the middle, showers and wetsuit/towel rack to the left 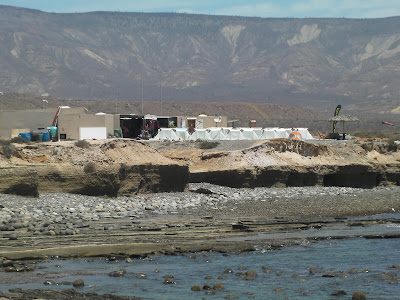 Looking back at camp from the "Islote" 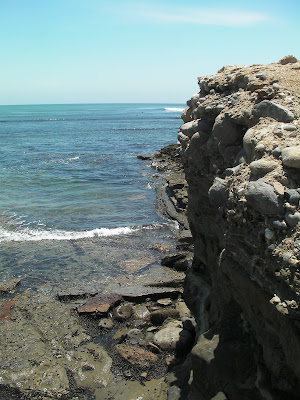 We did some tidal pool exploring at low tide...look how clear the water is 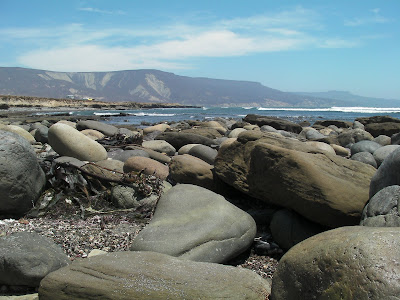 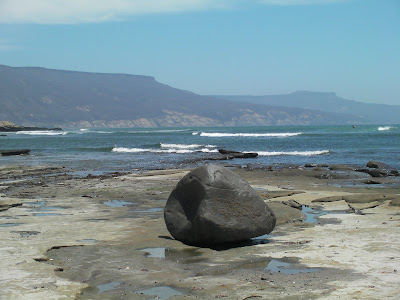 This rock was covered at high tide, was the size of a large beachball 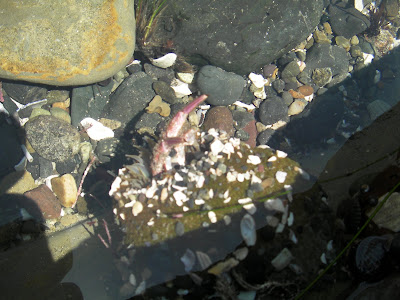 Not sure of the name of this mollusk looking thing that attaches itself to a rock and has tentacles, but it was ingesting a crab. 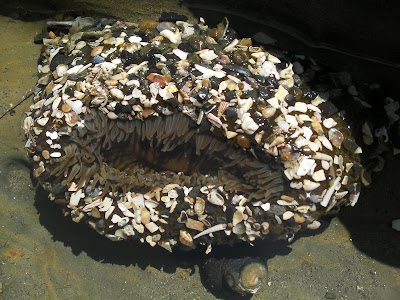 What do you call it? 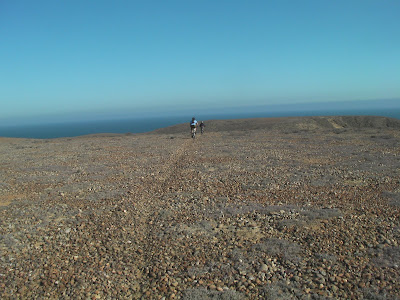 Heading to "Top of the World", where you overlook the camp. 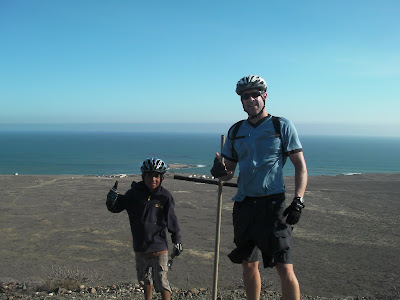 At the "Top of the World" with Luis, the 12 year old son of a local, and one of our new friends. Luis would hang around camp sometimes and stay hidden until we were suiting up to ride. Then he would all of a sudden appear out of nowhere with a helmet, gloves, and a bike and ready to ride. Language barrier didn't matter and we figured what the heck. Turns out the kid can ride and stayed with us the entire time. 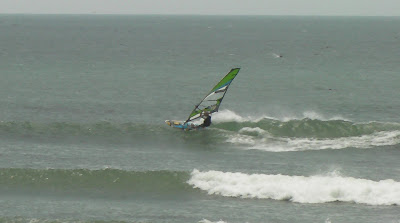 These two pics above are of Matt on a smaller day in the middle of the week. Matt rallied the troops by going out and setting an example of what was still possible in the smaller stuff. We followed and had a great time.

Posted by Waterturtle at 7:27 PM

Pretty awesome place. It grows and grows on you too. You'll be back. I think next time I go it'll be for two weeks.

Sweet to see the "classic" Hatteras Wave Fest and Wave Jam shirts in the first pic! :)

Yup that place is awesome. Did you spend any time in the bowl?

Aaron, There were a couple of good days happening at the bowl but we were having so much fun at the beach break, we stayed there one day, the other day we got out there late b/c of mtn bike ride and we were afraid the wind was going to die on us. I know we missed out and will definitely hit it next time.

very nice, thxs for sharing Mac. Save some for Hatteras next month!