So as certain events and races started to form in our spring calendar, it became apparent that I had an opportunity to do something unique - participate in three very different and challenging ocean board sports events over three weekends in a row - and to stretch myself by participating in events I don't normally do.

The first weekend was the Fort2Battery open sailing race in Charleston, SC (more on this one below).  The second weekend was the Wrightsville Beach SUP Surf ProAm (see Part 2).  And the last weekend (but certainly not least) was the Carolina Cup Graveyard SUP race (see Part 3) - the last two events both held in Wrightsville Beach, NC.  I eloquently named this stretch of competitions - The Trifecta.

This was the 2nd running of the Fort2Battery race.  It is an open sailing race in Charleston Harbor that starts at Fort Sumter (at the mouth of the harbor next to Morris Island) and runs to the Historic Battery section of Charleston.  Although most of the competitors were kiteboarders (either on twin tips, race boards, or foil boards), there were also Moth foil race sailboats, windsurfers, catamarans, and dinghy sailboats also making up the fleet.  It's estimated to now be the largest open sailing race in the country and was live streamed on the web (click here for link to that livestream footage). 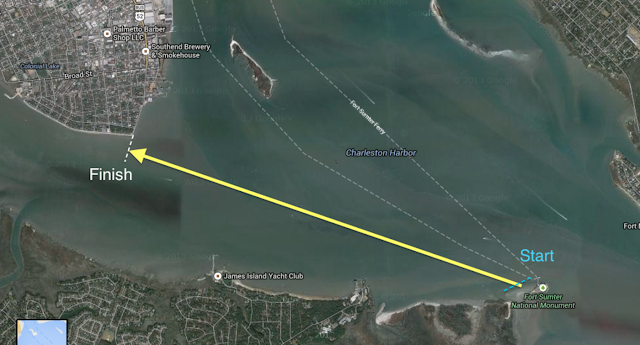 Here is a video I put together from footage provided by Rainee Hale, Steve Shapiro, and myself.
And if you feel so inclined, you can read the full rundown of my race below that.


WHAT HAPPENED - THE GORY DETAILS

The actual race date of Saturday April 11th didn't happen due to light winds and the race was postponed to the next day, which had better forecasted winds.  Sure enough, ENE winds kicked up and built throughout the day.  Competitors had to make their own way to the start next to Fort Sumter, most of us launching from James Island Yacht Club or Sunrise Park next door.     This was going to take a while since we had to sail upwind quite a distance to get there.  That meant we had to decide on the right sail/kite & board size based on what we thought the wind was going to do approximately 1.5 - 2 hours later.  It was blowing around 20mph as I prepared my equipment, so I rigged a 6.5 sail and 135lt slalom board.

I warmed up for about an hour by sailing upwind to the start and doing a couple of downwind runs.  It was the perfect set up for the 20mph winds and sailing across the wind and upwind.  But with the ENE wind direction, it was going to be a straight downwind drag race.  I was able to go downwind at a decent deep angle in my warmup.  But just before the 1pm start, the wind increased to over 25mph with gusts over 30mph.  Uh-oh.  Here is the iWindsurf graph from Sunday, April 12th.

With 75 competitors, thankfully the race organizers stretched out a long start line.  The horn blew and we all took off.  I took a deep downwind angle right away trying to make a straight bee line to the Battery, but was immediately overpowered in the stronger 25 mph+ wind.  I held on for a while but had to finally jibe (turn in downwind direction).  I saw two of the Moth foil race boats already turned over in the water.  Then I fell in very choppy water and both my calves cramped up as I was trying to water start.  I finally water started but had a hard time maintaining a deep downwind angle without my calves continuing to cramp.  I fell a few more times as a result and had to work out the cramps in the water.  It just wasn't happening for me.  That finish line was still a long way away and I was getting worried about just getting back to the launch at this point.  So I threw in the towel and limped back to Sunrise Park.  Super disappointed I couldn't finish the race but that's how it goes sometimes.  It just wasn't my day.  Sometimes you take the bull by the horns and sometimes the bull gets you.

Zack Marks, from St Petersburg, FL won the line honors and set a new course record of 6 minutes and 10 seconds on his foil kite board.

A big congratulations goes to all the competitors and especially to all those who finished it in overpowered conditions.  I think there were 5 of us windsurfers who started the race and three of them finished, including two of my Lake Norman windsurfing compadres Jeff Olson (also known as Raceboard Dude..and he was 1st windsurfer to finish) and Tony Vandenburg (who has competed in the Everglades Challenge and Watertribe NC Challenge)....an awesome feat in those conditions.  Way to go guys!

I also enjoyed meeting several of the other racers and other Charleston folks.  Everyone couldn't have been nicer and it was fun talking shop with everyone.  Since I'm spending more time in Charleston these days, I look forward to seeing everyone again on and off the water.

Click here for a link to more pictures of the race.

Next up - Part 2 - Wrightsville Beach SUP Surf Pro Am

Posted by Waterturtle at 7:06 PM