Oh...you meant to say you want to drink the water. C'mon Sergai...help me out here...we're just a bunch of boys from North Carolina.

Sergai is our resident camp Russian, now living in San Francisco. We have a nice little international contingent thing going on here. We also have Coogey....a Japanese fellow who doesn't know a lick of English...and he's here for 3 weeks. And then there's Frenchie Alain, who lives in Atlanta...and who came with us, courtesy of a Donald & Troy connection. There are also guys from Santa Barbara, San Fran, Portland, and even Cleveland. Josh Sampiero, editor of Windsurfing Magazine is here along with SoCal sailor Casey Hauser and pro Wyatt Miller. They are camping just south of us on The Point. I hear other pros and former pros such as Kevin McGivillary and Brian Caserio are on their way down to catch the upcoming swell. And then there's us...the NC crew.

We're here and we're having a great time. Punta San Carlos is sweet!

Our Cessna plane ride in was a nice trip with awesome views of the Mexican Pacific coastline all the way down. That Saturday evening, we got our Baja Fog initiation after an afternoon of light wind wavesailing. A Baja Fog is a Corona beer with Tequila and lime in it. Actually tasted pretty darn good....could be my new post sesh beverage at the beaches back home. As if on cue, the next morning a big fog swept through the area. Not to fear, as the sun broke through and we got to wavesail again on days 2 & 3...each day the wind getting a little stronger. The waves have been a mix of chest to knee high so far depending on the sets and the tide. I've been on 6.3, 6.0, 5.2, and 5.0 sails...in that succession over the first 3 days. The forecast is calling for a bigger swell so everyone is getting excited. My back is doing fairly well (knock, knock) but I've been holding back and trying to ease into it....not outdoing myself. The first 3 days of smaller waves and wind have been good for us beginner wavesailors to get warmed up and initiated to this spot.

Rob has already posted an early video of our arrival on Saturday here...no wavesailing shots in this but gives a great perspective of the camp and our Baja Fog initiation, etc. He's also got some other wavesailing pictures posted on there as well...check it out at the link above.

Here are a couple of pics...the wifi connection here is spotty and very slow...so I'll be posting many more after I get home, along with video. Adios! 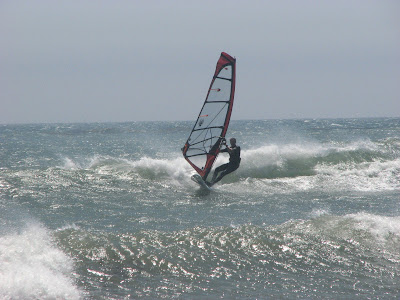 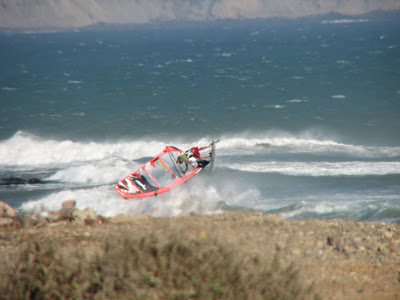 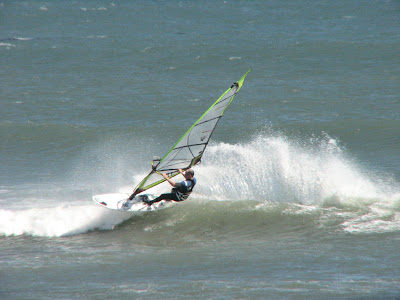 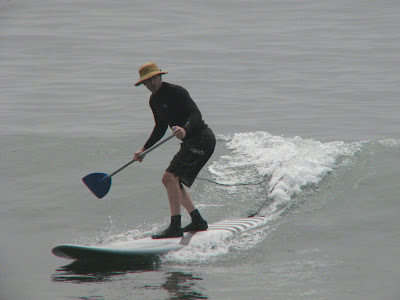 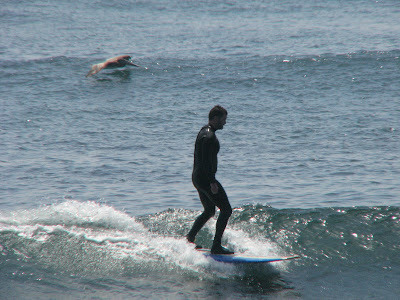 Tommy soul surfing with my friend, the pelican 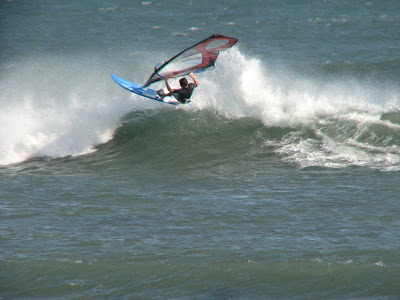 SoCal sailor Casey Hauser off the lip
Posted by Waterturtle at 11:41 AM

jealous beyond words. hope the swell picks up for ya'll.
glad to hear your back is doing well.