OK, first of all...I've found that the GoPro camera makes the waves look A LOT smaller than they really were...no lie. So this video isn't really that rad and doesn't do the Cabarete reef wavesailing any justice. Here is an example...check out this still photo I captured from the GoPro footage - 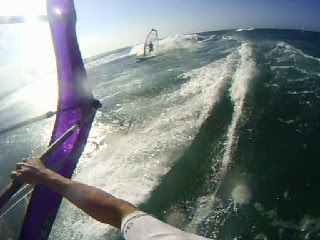 Note the size of the whitewater against the windsurfer behind me. This was after the wave built up and broke. The whitewater is about chest high to that sailor (and I'm on that same wave) but the waves before breaking were getting up to head high that day and that wasn't the biggest day that week. You would never know this by watching the helmetcam footage alone. Also, that sailor in the picture was a lot closer to me than that shot indicates. That's a result of the wide-angle lense. You'll see in the video he comes in from upwind of me on the same tack and makes a downwind move on the wave and scoots down behind me. We barely missed each other but the video makes it look like he was far away.

Anyway, I'm not trying to build it up so much except to prove a point about the GoPro camera not depicting the real size of the waves, swell, chop, and distance to other sailors. Even my past GoPro lake sailing footage makes the lake look totally flat when in reality there was some decent chop. In this Cabarete video there is a clip of me jibing on an ocean swell face. The swell was pretty big but you can't tell at all in the video. I'm not complaining...just an observation. The last half of this video is a complete run out through the reef, past it into the big blue ocean, jibing, and coming back to catch some waves. OK, enough about that...here's the dang video (3 1/2 minutes)...enjoy because it really was fun out there!

Posted by Waterturtle at 8:32 PM

great video. the go pro is magical, and maddening all at the same time