We're back home and rested. Some final thoughts on Cabarete and a few final pics:

- Sailed 5 straight days mostly on 5 meter sails. On the 6th day it was very light so I took my daughter out on a big board and we played around, plus I went for a SUP paddle. The final and 7th day, the wind came straight onshore at around 15mph and was very overcast which wasn't very inviting so I passed and hung out with the family. 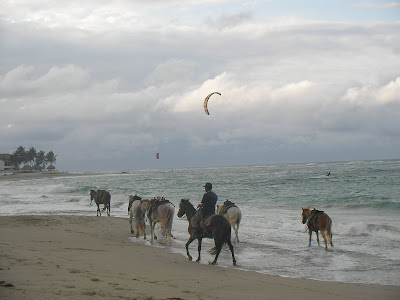 - Overall, great windsurfing spot as I mentioned earlier if you like bump & jump, big ocean swell, and onshore reef wavesailing. On small swell days, it can be fairly flat on the inside. With big swells, there can be quite a shorebreak. The reef (coral) was about 4 ft deep at its shallowest below the waves so it was generally safe to ride aggressively. On the biggest day of the week, the waves were reaching well overhead and I hear they can get bigger on larger swells. In my last post, click on the reef windsurfing pictures I took from long distance. Notice the height of the waves compared to some of the sailors. Although I paid some dues, the waves were user friendly and didn't thrash you too hard if you fell as they sort of crumbled on themselves instead of throwing big tubes. The interesting thing was doing the wavesailing so far from the beach instead of right there at the beach. I'm a reasonably skilled windsurfer but I don't have a lot of wave experience. So it was a good and fun challenge for me and it gave me more confidence for attacking the waves again in the future. 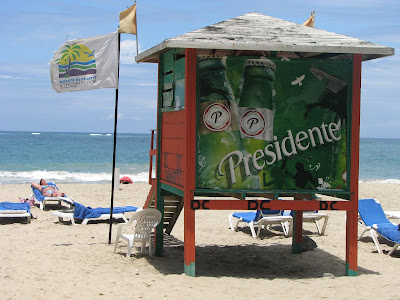 - Yes, Cabarete is a very big kiting place. However, most of the kiters were concentrated well west and downwind of us at "kite beach". Click on one the kite pictures from my last post and you can see how many kiters were out there. Kite Beach also has their own large reef to play in which I understand is pretty shallow. There is an unwritten rule that kiters aren't supposed to play at the reef where the windsurfers are. However, that rule was broken consistently by about 3-4 kiters each day. It wasn't really a problem for me since I'm used to windsurfing around kiters but one did get in my way on a wave...he fell and I had to go around him and miss the last half of a nice wave ride.

- The weather was great. Low 80s during the day, and around 70 at night...very comfortable and not overly hot. The water felt great. We had a couple of showers at night and on the morning of our departure. There were some mosquitos and no-see-ums so you needed to have the bugspray around at night but it wasn't too bothersome. 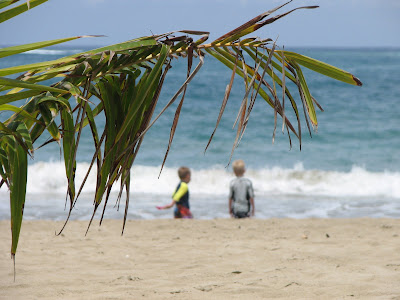 - The one big negative in my opinion and something I wasn't aware of - the beach vendors. Every day, every hour, there was someone coming up trying to sell us something....fruit, hair braiding, massages, wooden carvings, newspapers, cookies, etc. The same people over and over coming up to us. At first I was real irritated but after a couple of days I settled into the "irie" island vibe, relaxed, and we started striking up friendly conversations (thanks to my friendly wife) with them and got to know a few of them. And yes, we bought some stuff including a beautiful handcarved wooden waterturtle. Still though, I wasn't a big fan of the constant barrage each day.

- We arrived on the last day of Semana Santa (April 12th), a very popular holiday in Cabarete. It had been a week long celebration that included parties all day and night on the beach with restricted windsurfing access because of the crowds. We were warned about this by Vela which is one reason we arrived on Sunday versus that Saturday. We talked to some folks who arrived on Saturday and they said there were thousands of people on the beach and they partied very loudly well into the wee hours of the morning. There were 5 concert stages being taken down on Sunday and Monday after we arrived. Although there was an effort to clean the beach after the celebration, there sadly were many trash remnants that remained the entire week we were there. 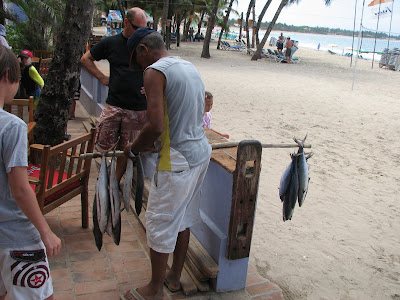 - The food was mostly good - LAX, Voy Voy, Cafe Pitu, Pomodoro, Onnos, and La Casita were all good. We stuck to all the restaurants on the beach within walking distance. They all had seating on the beach so you could sit there with your toes in the sand. However, unless you had the local Dominican chicken dish every night (120 pesos = about $3.50), it wasn't nearly as cheap as I was led to believe. The Presidente beers were about 90 pesos apiece. Aside from the inexpensive beer and local fare, many dinners ended up costing almost as much as other islands we've been to. This was mostly due to the 16% tax they put on the bill. Many of the bars/restaurants turned into live music spots or discos at night and there was consistently a young crowd there to party until very late.

- Cabarete Palm Beach Condos was a nice place and family friendly. There were other families there. Of course, the kids loved the pool which was a saving grace at times. It was mostly quiet except you could hear some thumping music late on Wednesday night coming from down the beach at one of the bars.

- Vela was awesome. Great equipment selection and great atmosphere for just hanging out to eat/drink as well (Voy Voy). They also had great beginner equipment and SUP boards/paddles. The staff was friendly and knowledgable. It was less than 5 minute walk from Palm Beach Condos. 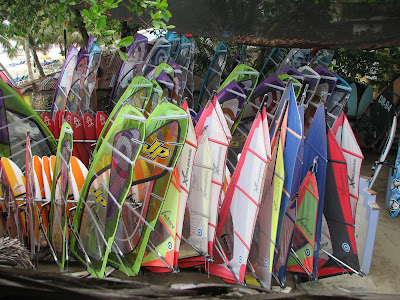 - We did not rent a car, nor did we do much exploring which is a big departure from most of our trips. We told ourselves that unless the wind didn't blow, we were going to just stay at the beach. There are many other things to do there such as surfing, mountain biking, hiking, canyoneering, waterfalls, river kayaking, wakeboarding, national parks/forts, etc but we didn't do any of that, except for the one morning of surfing with my daughter. It was a small regret that we didn't do more exploring but we sure did relax. If I hadn't sailed 5 days in a row, I'm sure we would have done more. And it was nice to be able to walk everywhere...all the restaurants and shopping right there. Its recommended not to venture too far into the interior of the Dominican Republic as there isn't much in terms of infrastructure or medical help and its supposedly not safe after dark. 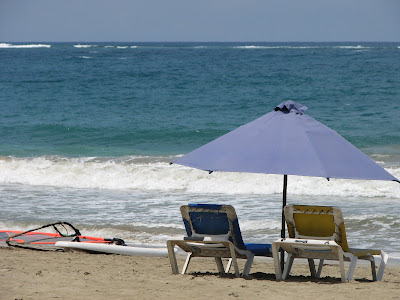 - I have friends who went there in the early 90s before there was much there and it was much wilder. It is still a little bit of the "wild west" there...which is appealing to some folks I suppose. There were shotgun wielding armed guards placed at certain spots (outside banks and some hotel entrances) and I noticed some prostitution. However, we felt very safe at all times. 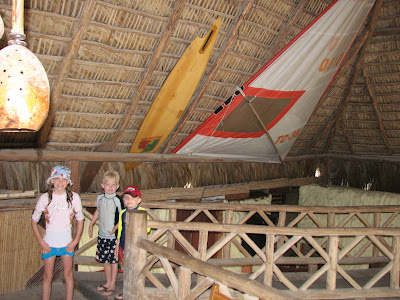 - Although Palm Beach Condos supposedly had "filtered" water, we brushed our teeth with the bottled water that was provided and kept our mouths shut when showering. We also tried to stray from iced drinks and raw leafy vegetables, although that wasn't foolproof. Both Kris and I had some minor stomach aches and one of our kids had a 3 hour bout on the can but it passed after that. We met a family whose 14 year old had spent 2 days sick and throwing up. You just have to be careful what you eat and drink there like you would in any other Latin American/Caribbean country. We proactively packed prescription medicine for treating bacterial issues in case we got it real bad.

- There were many French and German people there. We met a few Canadians and Americans, including some very nice couples from Washington, Minnesota, and Colorado that I think may now come and vacation in the Outer Banks based on my recommendations. Most of the locals knew some English. It wasn't too hard to communicate if you knew a few key Spanish words and were good at using your arms and hands :-)

As you can tell in the pictures, its a very beautiful place. Overall, a great vacation and highly recommended if you liked what you read and saw here and can deal with some of the things I pointed out.

I'll post the GoPro helmetcam video of the reef windsurfing in the near future.
Posted by Waterturtle at 7:56 PM

Thank you very much for sharing! This is exactly the kind of inside skinny I need to convince me to finally go there.

Sergey: I have been to Vela Cabarete every year for five years running. I always go with several other sailors. We have freinds now who are locals, and we usually see other friends who are there during the same week. We love the fact that everything is right there within a mile. No car - only your sandals needed. It is not as inexpensive as it used to be, but still reasonable. No one has gotten sick on our trips, but we usually drink bottled water always. We go to the Supermercado and buy gallons at a time and fill smaller bottles for the day. Sailing has always been very good with one trip mast high on a few days. It is more consistent June/ July. We have never been disappointing, and I always leave feeling very fortunate to have the things I do, and be able to visit this little piece of Caribbean simplicity. Brent